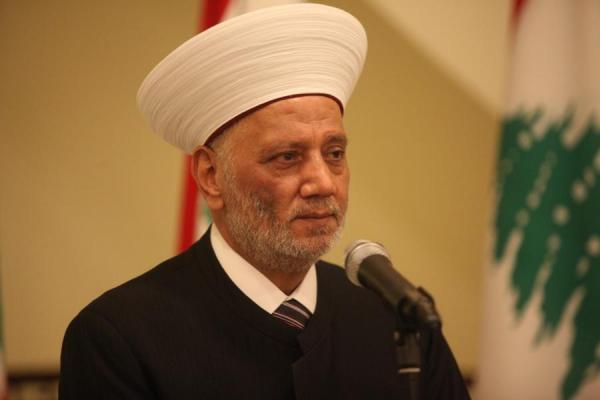 The Grand Mufti of the Republic Sheikh Abdul Latif Derian decried on Friday the verdict against former Minister Michel Samaha and called for an independent judiciary to give criminals a fair trial.

“The state and the nation are in danger. We look forward for the righteousness of the Lebanese judicial system so that its decisions become fair and create stability,” Derian said in a televised speech on the occasion of Isra and Miraj.

The Isra and Miraj are one of the most significant events in the Islamic calendar.

Derian called on the judiciary to be “impartial and independent to give criminals fair verdicts.”

The Grand Mufti also stressed that the vacuum at the Baabda Palace has no justification.

Derian also drew attention to the region’s conflicts and the rising danger of extremism in several countries.“Our nations and religions are in danger. Such a danger on religion and the land does not only come from Zionists but also from divisions in our religion and extremism,” he said.

Derian described the Islamic State without naming it as “evil” and rejected the destruction of churches under the pretext of religion.

Turning to the Palestinian cause, he said: “The Zionists are not only occupying land, they also want to abolish others.”

Turning to the Palestinian cause, he said: “The Zionists are not only occupying land, they also want to abolish others.”

“Zionists want to destroy al-Aqsa Mosque and the Church of Resurrection,” he stated.

They “are assaulting our religion and forcing our displacement by building more settlements.”

Derian called on all believers to unite with the Palestinians and those seeking justice.

“Our priority is to salvage al-Aqsa, Jerusalem and the Palestinians,” he said.

Samaha , who was arrested three years ago for smuggling explosives into Lebanon from Syria was sentenced on Wednesday to four and a half years in prison for forming a group to carry out terrorist attacks.

Samaha was tried by a military court on charges related to a plot allegedly devised with Syria’s security chief, Ali Malmuk. Samaha confessed to the charges last month and gave details of the plans.

He was found guilty of “having tried to carry out terrorist actions and for belonging to an armed group” and was also stripped of his civic and political rights.

Samaha, who is close to the Syrian government, has been in detention since August 2012.

Several Lebanese leaders condemned the sentence issued by the military court against Samaha .

“The court’s verdict in Samaha’s case legalizes assassinations and explosions,” Jumblatt said in a statement.