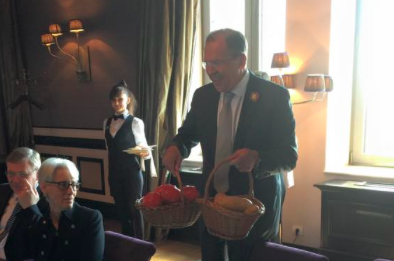 Russian FM Sergei Lavrov giving US Sec. of Srate John Kerry a gift of Russian potatoes and tomatoes in Sochi
Share:
Things are so frosty between Russia and the United States these days that the slightest sign of warmth catches the eye – even a gift of spring vegetables.

Mr Kerry, the US secretary of state, was in town to meet his counterpart and Vladimir Putin, Russia’s president.

The unusual gift suggested a softening of mood amid prickly talks over the violence in Ukraine, Syria and Yemen. But why the spuds?

The American said then that he and Mr Lavrov had spoken by phone when he was on holiday in Idaho, and the Russian recalled the region’s famously giant tubers.

“He told me he’s not going to make vodka. He’s going to eat them,” Mr Kerry explained after the Paris summit, adding: “I really want to clarify: There’s no hidden meaning. There’s no metaphor. There’s no symbolic anything. … He recalled the Idaho potatoes as being something that he knew of, so I thought I would surprise him and bring him some good Idaho potatoes.”

But had Mr Kerry’s gift in Paris been reverse-engineered?

After meeting in France, Mr Lavrov admitted he’d sent the Idaho crop to farmers in Krasnodar region (where Sochi is located) who “would experiment on them a little”.

Tantalisingly, Maria Zakharova, the Russian official who posted the Sochi pictures on Facebook on Tuesday, said the foreign minister’s potatoes for Mr Kerry were indeed from Krasnodar. They were, she said, “distant relatives of those that his US counterpart once brought him”.