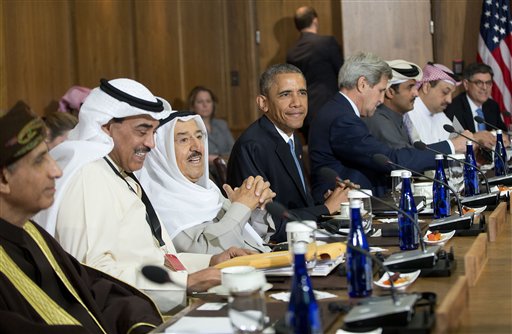 President Barack Obama sits with Kuwaiti Emir Sheikh Sabah Al-Ahmad Al-Sabah, Secretary of State John Kerry, center right, and Gulf Cooperation Council leaders and delegations at Camp David, Md., Thursday, May 14, 2015. Obama and leaders from six Gulf nations are trying to work through tensions sparked by the U.S. bid for a nuclear deal with Iran, a pursuit that has put regional partners on edge. Obama is seeking to reassure the Gulf leaders that the U.S. overtures to Iran will not come at the expense of commitments to their security. (AP Photo/Pablo Martinez Monsivais)
Share:

CAMP DAVID, Md. — President Barack Obama and leaders from six Gulf nations gathered at Camp David Thursday in an effort to work through tensions sparked by the U.S. bid for a nuclear deal with Iran, which has put regional partners on edge.

Obama is seeking to reassure the Gulf leaders that U.S. overtures to Iran will not come at the expense of commitments to their security. He is expected to offer them more military assistance, including increased joint exercises and coordination on ballistic missile systems.

But when the meetings at the presidential retreat in the Maryland mountains conclude, it’s unlikely Obama will have fully assuaged the Gulf’s deep-seated fear of Iranian intentions in the region.

“My guess is that the summit is going to leave everybody feeling a little bit unsatisfied,” said Jon Alterman, the Middle East director at the Center for Strategic and International Studies.

As the leaders gathered around a large table in the Laurel lodge, the most notable absence was Saudi King Salman. On Sunday, Saudi Arabia announced that the king was skipping the summit, just two days after the White House said he was coming.

The president made no mention of Saudi skepticism of the Iran talks as he opened that meeting, but he acknowledged the region is in the midst of a “very challenging time.”

The White House and Saudi officials insist the king is not snubbing Obama. But Salman’s absence comes amid indisputable signs of strain in the long relationship between the U.S. and Saudi Arabia, driven not only by Obama’s Iran overtures but also the rise of Islamic State militants and a lessening U.S. dependency on Saudi oil.
“There have been disagreements under this administration and under the previous administration about certain policies and development in the Middle East, but I think on a set of core interests, we continue to have a common view about what we aim to achieve,” said Ben Rhodes, Obama’s deputy national security adviser.

The Gulf summit comes as the U.S. and five other nations work to reach an agreement with Iran by the end of June to curb its nuclear efforts in exchange for relief from international economic sanctions. The Gulf nations fear that an easing of sanctions will only facilitate what they see as Iran’s aggression.

The White House says a nuclear accord could clear the way for more productive discussions with Iran about its reputed terror links. The U.S. has criticized Iran’s support for Hezbollah, as well as attacks carried out by Iran’s Quds Force.

In 2011, the Obama administration accused Iran of plotting to kill the Saudi ambassador to the United States in Washington.

The Saudis are also particularly concerned about the situation in Yemen, where Houthi rebels with ties with Iran have ousted the U.S.- and Saudi-backed leader.
For more than a month, a Saudi-led coalition has tried to push back the Houthis with a bombing campaign. On Tuesday, a five-day humanitarian cease-fire went into effect, though the pause in fighting was already at risk. A jet fighter from the Saudi coalition on Wednesday struck a military convoy belonging to Shiite rebels and their allies in southern Yemen.

Saudi officials cited the cease-fire as one of the reasons why King Salman needed to stay in Riyadh and not make the trip to the United States.

The Saudi king isn’t the only head of state sending a lower-level representative to the summit. The heads of the United Arab Emirates and Oman have had health problems and were not making the trip.

Bahrain’s royal court announced Wednesday that rather than travel to Washington, King Hamad bin Isa Al Khalifa would be attending a horse show and meeting with Queen Elizabeth II.