6 killed dozens injured in a train crash in Philadelphia 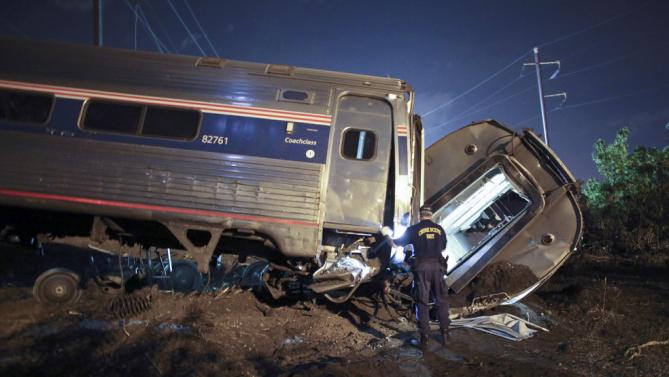 At least six people were killed late Tuesday when an Amtrak train derailed outside Philadelphia.

Emergency officials confirmed that six other people were critically injured and more than 140 others were transported to local hospitals for evaluation or treatment. Amtrak and city authorities said that “approximately” 238 passengers and five Amtrak employees were on the train. Philadelphia Mayor Michael Nutter told reporters early Wednesday that not all of the passengers on the train’s manifest had been accounted for.

The mayor added that there were train cars that were “completely overturned, on their side, ripped apart.”

Amtrak released a statement early Wednesday saying it was “deeply saddened by the loss of life”. The company earlier announced that service between New York and Philadelphia had been suspended indefinitely and that people seeking information about friends or relatives on the train could call a special hotline at 1-800-523-9101.

Nutter, citing the mangled train tracks and downed wires, said, “There’s no circumstance under which there would be any Amtrak service this week through Philadelphia.”

Northeast Regional Train 188 was traveling from Washington, D.C., to New York City when it crashed just northeast of Philadelphia’s Center City at approximately 9:30 p.m. local time. The front of the train was going into a corner when it shook.

An Associated Press manager, Paul Cheung, was on the train and said he was watching Netflix when “the train started to decelerate, like someone had slammed the brake.”

“Then suddenly you could see everything starting to shake,” he said. “You could see people’s stuff flying over me.”

Cheung said another passenger urged him to escape from the back of his car, which he did. He said he saw passengers trying to escape through the windows of cars tipped on their side.

“The front of the train is really mangled,” he said. “It’s a complete wreck. The whole thing is like a pile of metal.”

Passenger Beth Davidz, who had boarded the train minutes earlier at Philadelphia’s 30th Street Station, told Fox News’ Megyn Kelly that the train was approximately 10 minutes out from the station when it went into a “slow slide.”

“People were helping each other to get up, helping the people who were trapped,” Davidz said. “We weren’t quite sure how to get out of the car.”

Another passenger, Daniel Wetrin, was among more than a dozen people taken to an elementary school afterward.

“I think the fact that I walked off (the train) kind of made it even more surreal because a lot of people didn’t walk off,” he said. “I walked off as if, like, I was in a movie. There were people standing around, people with bloody faces. There were people, chairs, tables mangled about in the compartment … power cables all buckled down as you stepped off the train.”

There was no immediate information about the cause of the derailment. The National Transportation Safety Board announced that it had dispatched a team to the site that was expected to arrive Wednesday morning. Amtrak also said it was investigating the crash and trucked in portable lights to illuminate the scene overnight as workers examined the wreckage.

The area where the derailment occurred is known as Frankford Junction and has a big curve in the tracks. It’s not far from where one of the nation’s deadliest train accidents occurred: the 1943 derailment of The Congressional Limited, from Washington to New York, which killed 79 people.

Roads around the area were blocked off as police swarming around the crash site told people to get back. They pleaded with curious onlookers: “Do NOT go to scene of derailment. Please allow 1st responders room to work.”

The Philadelphia Inquirer reported, citing a fire official, that two people were found under the train when first responders arrived. Several injured people, including one man complaining of neck pain, were rolled away on stretchers. Others wobbled while walking away or were put on city buses. An elderly woman was given oxygen.

Former Pennsylvania Congressman Patrick Murphy was on the train and said he had been helping people. He tweeted several photos of firefighters helping people in the wreckage.