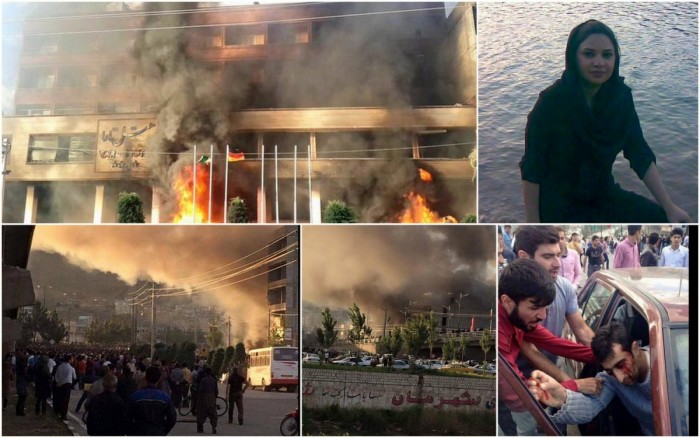 Hundreds of Kurds have burned down a hotel over allegations that a Kurdish girl jumped to death to escape being raped by an Iranian Intelligence official.

The Kurds boiled over after it emerged that the 23-year-old Kurdish girl, Farinaz Khosrwni, had jumped to her death to escape a rape attempt by an Iranian intelligence official, ARA reported. The girl was an employee of Tarai hotel in Mahabad.

She jumped from the fourth floor of the hotel building, which was later burned down by the angry mob.

Mahabad is a predominantly Kurdish city, located in West Azerbaijan Province of Iran. The Kurdish population of the country have been pushing for independent statehood since 1946. They repeatedly face brutal treatment from the Iranian regime.

Hundreds of locals gathered at the hotel and burned down the building on Thursday, chanting: “We will burn every inch of every place that forces our women to kill themselves to avoid rape.”

Since then tensions in the ethnically Kurdish city have been running high as protesters clashed with the security forces, who fired live bullets at the crowd.

“The Kurdish people in Iran have been subjected to persecution and suppression by the authorities. This incident, although seems individual, reflects the degree of brutality of security officers in Mahabad,” Kurdish activist Ibrahim Asaad told ARA News.

Noting that the suppression of Kurds by the Iranian regime has “reached unbearable level”, Asaad said: “This protest has been motivated by sympathy with the victim and dozens other victims who were exposed to such acts by the Iranian authorities.”

Many Kurdish people also took to Twitter to highlight the issue. By using the hashtag, #JusticeForFarinaz, the people condemned the Iranian regime and the injustice meted out to the young woman.