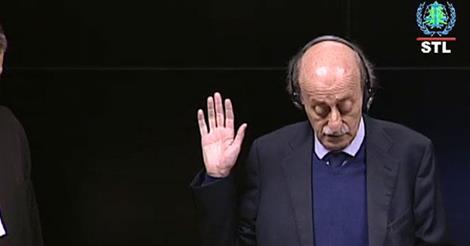 “I think that when [Hariri] visited… Assad on Aug. 26, 2004, the death sentence was made then,” Lebanese newspaper the Daily Star quoted Jumblatt as telling the Special Tribunal for Lebanon.

The Syrians “will not do anything against anyone else in Lebanon,” Jumblatt recalled Hariri saying.

“I have spoken to [French President Jacques] Chirac and he sent a very firm and harsh message to… Assad.”

However, after months of standoff, Jumblatt told the court that Hariri began to feel a sense of “imminent danger,” and that “he was afraid.”

Five members of Lebanese movement Hezbollah have been charged with plotting the blast that killed Hariri and 21 others, but the tribunal is now incorporating Syrian regime involvement.

Jumblatt previously told the court that he had evidence that the regime had killed his father Kamal in 1977.

On Tuesday, he said both he and Hariri had been opposed to U.N. Security Council Resolution 1559 of Sept. 2004, which called for Syria to completely withdraw its forces from Lebanon and for the disbandment of all militias.

“Neither Hariri nor myself had anything to do with Resolution 1559,” Jumblatt said. “France and other powers were the architects of 1559.”

Hariri and he “had a different position. We were calling for the implementation of the Taif agreement” of 1989, referring to a staged withdrawal of Syrian troops from Lebanon. “Our position was different from that of… Chirac.”

The newspaper said the Syrian regime was convinced that Hariri was behind the lobbying of international leaders to support the resolution.

At the Aug. 2004 meeting between Assad and Hariri, the Syrian president reportedly alluded to Resolution 1559 and threatened Hariri: “If Chirac wants to get me out of Lebanon, I will break Lebanon.”