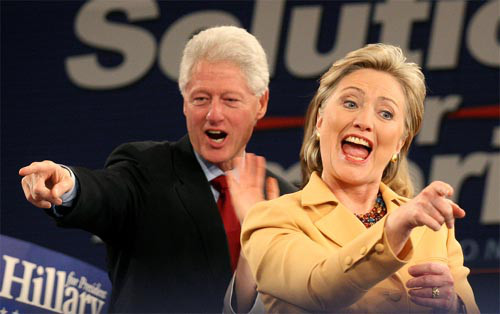 On issues large and small, the Democratic presidential contender is increasingly distancing herself from — or even opposing — key policies pushed by Bill Clinton while he was in the White House, from her recent skepticism on free-trade pacts to her full embrace of gay rights.

The starkest example yet came Wednesday, when Hillary Clinton delivered an impassioned address condemning the “era of incarceration” ushered in during the 1990s in the wake of her husband’s 1994 crime bill — though she never mentioned him or the legislation by name.

“We have allowed our criminal justice system to get out of balance,” Clinton told an audience at Columbia University in New York, making references to unrest in Baltimore and elsewhere and elsewhere over actions by police. “And these recent tragedies should galvanize us to come together as a nation to find our balance again.”

The contrasts between some of Clinton’s positions and those of her husband from 20 years ago show the extent to which Democrats, and the country as a whole, have shifted to the left on a number of key issues. Indeed, Bill Clinton now says that some of his incarceration policies went too far and that he regrets backing a federal law that defined marriage as being between a man and a woman.

But the differences also illustrate the dicey challenges that Hillary Clinton will face in attempting to both embrace and keep separate from the 42nd president, who remains personally popular but whose 1990s positions on some issues, particularly in the social arena, now feel out of date.

The candidate has also staked out positions to the left of her husband’s administration on core women’s issues, such as equal pay and paid maternity leave, as she seeks to become the nation’s first female president.

“Twenty years is a long time,” said Robert Reich, a leading liberal who served as labor secretary in the Clinton administration. “I don’t think she feels in any way bound by policies of a different administration two decades ago, even though she is married to the person who initiated those policies. I think we’ll see Hillary Clinton parting ways with the Bill Clinton administration on a number of matters.”

Clinton’s nascent campaign — which formally began a bit more than two weeks ago — sought to play down differences between the current candidate and the former president.

Spokesman Jesse Ferguson wrote in a tweet that Hillary Clinton’s positions on Internet policy are also likely to be different — not because her husband was wrong, but because “times change.”

In a statement to The Washington Post, the campaign said, “This campaign will be about Hillary Clinton’s vision for the next
20 years, not re-litigating policies from 20 years ago.”

Republican National Committee spokeswoman Allison Moore said Clinton was being opportunistic: “As Hillary Clinton continues to flip-flop on the issues, she’s only further proving that she’ll say anything to benefit herself politically, which is why the majority of American people find her to be untrustworthy.”

Some in the Republican camp have their own problems reckoning with family legacies, however. Former Florida governor Jeb Bush is struggling to calibrate the proper distance from his father and brother as he mulls a 2016 presidential campaign, while Kentucky Sen. Rand Paul, already in the race, is keeping his eccentric father, former congressman Ron Paul, at arm’s length.

The 1994 crime bill ushered into law by Bill Clinton came in the wake of the crack cocaine epidemic, building on anti-drug policies implemented during the Ronald Reagan years. The law enacted a broad range of tough-on-crime policies, including three-strikes-and-you’re-out requirements that helped fuel a surge in incarceration.

Many politicians in both parties have now concluded that at least some of those policies were a mistake.
In her New York speech, Hillary Clinton said measures that emphasized arrests and convictions for relatively minor offenses have failed the country, leading to overcrowded prisons and too many black men “missing” from
communities.

In her most specific policy proposals so far, Clinton also endorsed body cameras for police nationwide and said it is time for an overhaul of policing and prison strategies.

“Not only as a mother and grandmother, but as a citizen, as a human being, my heart breaks for these young men and their families,” she said. “We have to come to terms with some hard truths about race and justice in America.”

Bill Clinton has also had a change of heart. In a foreword to a new book of essays from the Brennan Center for Justice, he wrote that “we have overshot the mark.”

“We acted to address a genuine national crisis,” he continued. “But much has changed since then. It’s time to take a clear-eyed look at what worked, what didn’t, and what produced unintended, long-lasting consequences.”

Gay rights is another major area where Hillary Clinton has set out very different positions than her husband adopted while in office, adapting to a profound change in public mood. Both Clintons now repudiate the restrictions on gay military service and marriage that Bill Clinton signed into law.

Hillary Clinton — who said as first lady that she considered marriage to be between a man and woman — is making support for same-sex marriage a centerpiece of her campaign and is on record encouraging a constitutional right to same-sex marriage nationwide.

On trade, candidate Clinton has declined to endorse a pending Asia-Pacific trade deal, called the Trans-Pacific Partnership, that is opposed by labor groups and which she supported as secretary of state. Critics of the proposed deal claim it would be a repeat of the North American Free Trade Agreement, which they blame for a loss of jobs and economic security. Bill Clinton fought his own party to ratify the deal with Canada and Mexico in 1994.
“NAFTA means jobs. American jobs, and good-paying American jobs. If I didn’t believe that, I wouldn’t support this agreement,” Bill Clinton said then.

Hillary Clinton plans to unveil a detailed policy agenda on a variety of economic and other issues this summer, and progressive leaders said they are paying close attention to see where else she may deviate from her husband’s legacy.

So far, Clinton has made only vague statements about the most important domestic issues for Democrats, including the push to raise the minimum wage to $15 an hour. She also has not said definitely whether she supports expanding Social Security benefits, a top agenda item for Sen. Elizabeth Warren (D-Mass.), a favorite of the party’s liberal base.

“The economy is where there are the most question marks,” said Andrew L. Stern, a former president of the Service Employees International Union.

Another area of possible departure is on policies regulating major financial institutions, which in the wake of the financial crisis and the Occupy Wall Street movement have become an important cause of many Democrats.

The Glass-Steagall regulatory law, for example, was repealed during the Clinton administration, and many progressives would like to see it restored.

“It’s possible that she will part with the Clinton administration on its policies toward Wall Street,” Reich said.