Baltimore rioters threatening ‘anyone, who was not African-American’ 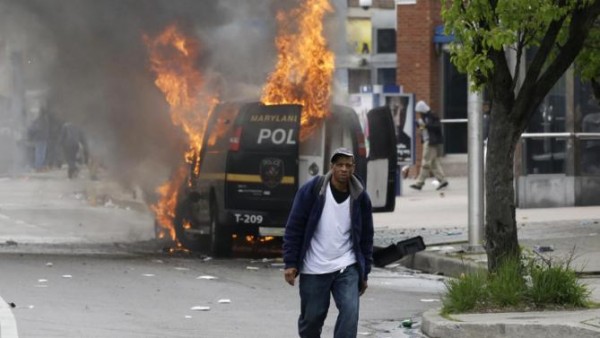 A man walks past a burning police vehicle, Monday, April 27, 2015, during unrest following the funeral of Freddie Gray in Baltimore. Gray died from spinal injuries about a week after he was arrested and transported in a Baltimore Police Department van. (AP Photo/Patrick Semansky)
Share:

A CNN correspondent covering the Baltimore( Maryland) anti-police riots live indicated rioters were openly hostile towards “anyone… who was not African-American.”

“Very, very angry to see anybody driving in a rental car who was not African-American,” he reported, “and very, very threatening to us.”

Streets in Baltimore looked like a war zone early Tuesday after a night of riots, fires and heartbreak.

“Too many people have spent generations building up this city for it to be destroyed by thugs who — in a very senseless way — are trying to tear down what so many have fought for,” Mayor Stephanie Rawlings-Blake said.

Buildings and cars across the city were engulfed in flames. About a dozen businesses looted or damaged. At least 15 officers were wounded, six of them seriously, the police commissioner said.

Law enforcement intelligence officials have put out a warning that someone has sent a text calling on people to kill “all white police officers” in reaction to the death of Freddie Gray while in Baltimore police custody, raising fears violence could spread nationally, according to safety memos obtained by The Washington Times.

Officers are being warned of possible ambushes and urged to change travel patterns and to tone down clothes or emblems that identify them as police.

The Baltimore police department separately put out a press release on Monday saying various gangs, including the Black Guerrilla Family, Bloods and Crips “have entered into a partnership to ‘take out’ law enforcement.”
Agencies