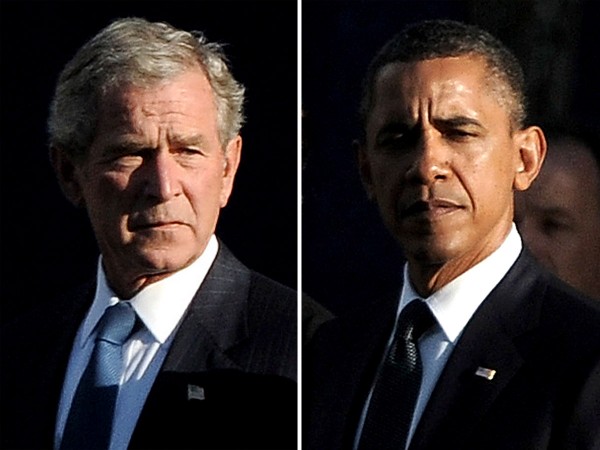 In a closed-door meeting with Jewish Donors Saturday night, former President George W. Bush delivered his harshest public criticisms to date against his successor on foreign policy, saying that President Barack Obama is being naïve about Iran and the pending nuclear deal and losing the war against the Islamic State.

One attendee at the Republican Jewish Coalition session, held at the Venetian Hotel in Las Vegas with owner Sheldon Adelson in attendance, transcribed large portions of Bush’s remarks. The former president, who rarely ever criticizes Obama in public, at first remarked that the idea of re-entering the political arena was something he didn’t want to do. He then proceeded to explain why Obama, in his view, was placing the U.S. in “retreat” around the world. He also said Obama was misreading Iran’s intentions while relaxing sanctions on Tehran too easily.

According to the attendee’s transcription, Bush noted that Iran has a new president, Hassan Rouhani. “He’s smooth,” Bush said. “And you’ve got to ask yourself, is there a new policy or did they just change the spokesman?”

Bush said that Obama’s plan to lift sanctions on Iran with a promise that they could snap back in place at any time was not plausible. He also said the deal would be bad for American national security in the long term: “You think the Middle East is chaotic now? Imagine what it looks like for our grandchildren. That’s how Americans should view the deal.”

Bush then went into a detailed criticism of Obama’s policies in fighting the Islamic State and dealing with the chaos in Iraq. On Obama’s decision to withdraw all U.S. troops in Iraq at the end of 2011, he quoted Senator Lindsey Graham calling it a “strategic blunder.” Bush signed an agreement with the Iraqi government to withdraw those troops, but the idea had been to negotiate a new status of forces agreement to keep U.S. forces there past 2011. The Obama administration tried and failed to negotiate such an agreement.

Bush said he views the rise of the Islamic State as al-Qaeda’s “second act” and that they may have changed the name but that murdering innocents is still the favored tactic. He defended his own administration’s handling of terrorism, noting that the terrorist Khalid Sheikh Mohammed, who confessed to killing Wall Street Journal reporter Daniel Pearl, was captured on his watch: “Just remember the guy who slit Danny Pearl’s throat is in Gitmo, and now they’re doing it on TV.”

Obama promised to degrade and destroy Islamic State’s forces but then didn’t develop a strategy to complete the mission, Bush said. He said that if you have a military goal and you mean it, “you call in your military and say ‘What’s your plan?’ ” He indirectly touted his own decision to surge troops to Iraq in 2007, by saying, “When the plan wasn’t working in Iraq, we changed.”

“In order to be an effective president … when you say something you have to mean it,” he said. “You gotta kill em.”

Bush told several anecdotes about his old friend and rival Russian President Vladimir Putin. Bush recalled that Putin met his dog Barney at the White House and then later, when Bush went to Moscow, Putin showed him his dog and remarked that he was “bigger stronger and faster than Barney.” For Bush, that behavior showed him that Putin didn’t think in “win-win” terms.

Bush also remarked that Putin was rich, divorced his wife and loves power. Putin’s domestic popularity comes from his control of Russian media, according to Bush. “Hell, I’d be popular, too, if I owned NBC news,” he said.

Regarding his brother Jeb’s potential run for the presidency, Bush acknowledged that he was a political liability for Jeb, that the Bush name can be used against him, and that American’s don’t like dynasties. He also said that foreign policy is going to be especially important in the presidential campaign and that the test for Republicans running will be who has got the “courage” to resist isolationist tendencies.

Regarding Hillary Clinton, Bush said it will be crucial how she plays her relationship with the president. She will eventually have to choose between running on the Obama administration’s policies or running against them. If she defends them, she’s admitting failure, he said, but if she doesn’t she’s blaming the president.

For George W. Bush, the remarks in Vegas showed he has little respect for how the current president is running the world. He also revealed that he takes little responsibility for the policies that he put in place that contributed to the current state of affairs.