Factbox: Foreigners in Nepal at time of deadly earthquake 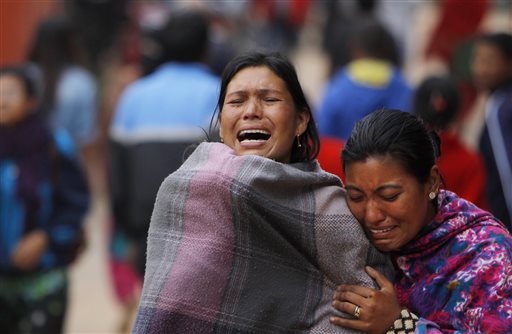 Here are details released by some foreign governments on citizens who found themselves in Nepal at the time a strong earthquake hit on Saturday, killing more than 2,200 people.

The 7.9-magnitude quake struck at midday at a busy time of year for the tourism-reliant country’s trekking and climbing season, with an estimated 300,000 foreign tourists in the country, several hundred of those on Mount Everest.

Countries are listed in alphabetical order.

– AUSTRIA: Around 250 Austrians in Nepal, no reports of any casualties.

– BANGLADESH: No Bangladeshis in Nepal been reported injured or killed. But four people reported killed inside Bangladesh.

– BRITAIN: No details released yet.

– BELGIUM: No reports of any victims.

– CROATIA: Four tourists, all accounted for.

– CZECH REPUBLIC: 155 nationals in Nepal, 54 have not yet been contacted.

– FRANCE: Around 500 French nationals located and confirmed safe, no reports of any deaths or injuries.

– GERMANY: No details released yet.

– INDIA: Five Indians killed in Nepal, and another 66 in Indian regions over the border. So far, 1,137 Indians evacuated from Nepal.

– INDONESIA: Thirty-four nationals in Nepal, 18 of them resident. Eighteen have not yet been contacted.

– ISRAEL: About 600 Israelis estimated to be in Nepal. About 400 have been contacted, most of them sheltering at the embassy in Kathmandu. These include 25 couples in Nepal to bring home babies born to surrogate mothers.

– ITALY: More than 300 Italians in Nepal have been traced, others not yet contacted.

– JAPAN: No reports of Japanese killed or injured, though checks are still under way. Some 1,100 Japanese living in Nepal are registered with the embassy, but no information on number of nationals traveling through.

– LATVIA: Local news agencies report around 41 people from Latvia in Nepal at the moment. Four are missing.

– LEBANON: 3 Lebanese are reportedly stranded at Kathmandu airport. They are all safe according to the Lebanese ministry of Foreign affairs and awaiting their evacuation after their flight was delayed due to the aftershocks.

– LITHUANIA: 25 Lithuanian nationals registered in Nepal are safe, no news on unregistered travelers.

– MALAYSIA: All Malaysians in Nepal are accounted for and safe, including a team of Malaysian climbers at Everest base camp.

– NORWAY: About 150 nationals in Nepal, no reports of any dead or injured.

– PAKISTAN: No information on exact number of nationals in Nepal, up to 15 have asked to be evacuated.

– POLAND: No news on any Poles affected.

– PORTUGAL: All seven Portuguese known to be in Nepal are safe.

– ROMANIA: Nineteen Romanians in Nepal, including mountaineer Alex Gavan and three others, all reported to be safe.

– SINGAPORE: No reports of any casualties.

– SOUTH KOREA: Three nationals injured in the earthquake. 650 residents and as many as 1,000 travelers are estimated to have been in Nepal.

– SWEDEN: Around 40 Swedes known to be in Nepal, no reports of casualties.