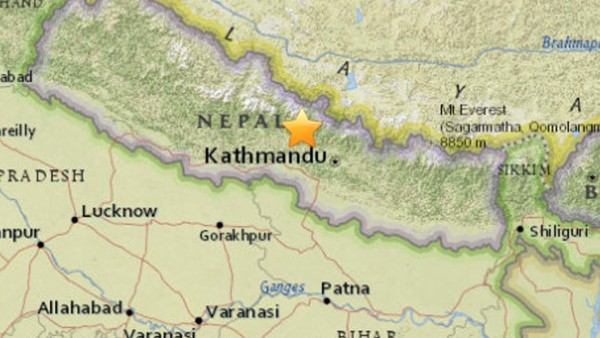 A powerful earthquake — the country’s worst in 80 years — rocked mountainous Nepal on Saturday, killing more than 1,400 people and leveling buildings and centuries-old temples. Dozens if not hundreds remained trapped under mounds of rubble.

Hospitals in the capital of Katmandu were so crowded that many of the injured were treated outside in the open, according to local media. The magnitude-7.8 quake, which shook a wide swath of northern India, Bangladesh, Tibet and Pakistan, also triggered avalanches in the Himalayas, killing at least 10 people on Mount Everest.

Nepal police said at least 1,457 people were killed. Given the scale of the destruction, the death toll could continue to rise. An emergency Cabinet meeting designated 29 districts as crisis zones, the Home Affairs Ministry said.

Around 180 bodies were pulled from the ruins of the nine-story Dharhara tower in the center of the capital, China’s official Xinhua News Agency reports. It said about 200 were feared trapped in the rubble of the tower in the city’s historic Basantapur Durbar Square.

“We had heard the earthquake stories from our ancestors and how I remember my grandparents telling me about the devastation of the 1934 earthquake and how it uprooted the Dharahara Tower then,” said Sabita Lal of Katmandu. “I saw the same thing happen today to the tower. It was a massive one.”

Another Katmandu resident, Deepen Bista, whose house was damaged, said the big jolt “was longer than we had experienced before, it lasted a little more than a minute.” He said that in the capital, the downtown — with old houses and narrows lanes — was hardest hit.

City hospitals were quickly overwhelmed. Dozens of people were gathered in the parking lot of Norvic International Hospital, where thin mattresses were spread on the ground for patients rushed outside, some wearing hospital pajamas. A woman with a bandage on her head sat in a set of chairs pulled from the hospital waiting room.

Doctors and nurses had hooked up some patients to IV drips in the parking lot, or were giving people oxygen.

Outside Nepal, at least 34 were killed in India, 12 in Tibet and two in Bangladesh. Two Chinese citizens died in the Nepal-China border.

The quake struck before noon local time about 50 miles northwest of Katmandu in an area that the U.S. Geological Survey calls one of the most seismically hazardous regions on Earth. It is at the spot where the India plate collides with the Eurasia plate in a process that has created the towering Himalayas.

The quake, which was felt as far away as Lahore in Pakistan, Lhasa in Tibet, and in Dhaka, Bangladesh, was followed by about 15 aftershocks, including one registered at a magnitude 6.6.

Finance Minister Ram Sharan Mahat said on Twitter that the quake had destroyed about 90% of some 1,000 home and huts in the Laprak and Barpak villages near the epicenter.

The humanitarian aid group Oxfam said it was sending a team of technical experts from Britain to provide clean water, sanitation and emergency food supplies.

“Communication is currently very difficult,” said Cecilia Keizer, Oxfam country director in Nepal. “Telephone lines are down and the electricity has been cut off, making charging mobile phones difficult. The water is also cut off.”

Keizer said the quake had destroyed many of Katmandu’s old houses and that at least one large apartment block had collapsed.

“People are gathered in their thousands in open spaces and are scared, as there have been several aftershocks,” she said.

Pushpa Das, a laborer, ran from his house when the first quake struck but could not escape a collapsing wall that injured his arm.

“It was very scary. The earth was moving … I am waiting for treatment but the (hospital) staff is overwhelmed,” he said, gingerly holding his right arm with his left hand. As he spoke, dozens of people showed up with injuries, mostly from falling bricks.

In Winchester, Va., Kriti Hada, a 20-year-old nursing student from Nepal who is attending Shenandoah University, said her sister in Nepal managed to get through by phone.

Although she, her mother and another sister were unhurt, they were frightened by the intensity and duration of the aftershocks, which are continuing, Hada told USA TODAY.

Hada said her relatives, like hundreds of others who survived the initial quake, were remaining out of doors until the seismic activity ceases. “We have very limited open spaces and they are surrounded by tall buildings that are also fragile,” Hada said.

Numerous countries around the world pledged immediate aid and supplies. The U.S. Mission in Nepal released an initial $1 million for immediate humanitarian assistance.The embassy also said a U.S. search and and rescue team is preparing to fly to Nepal. In addition, the U.S. Agency for International Development was sending a Disaster Assistance Response Team.

Indian Prime Minister Narendra Modi called a meeting of top government officials to review the damage and disaster preparedness in parts of India that felt strong tremors. Pakistan Prime Minister Nawaz Sharif offered “all possible help” that Nepal may need. France and Britain also said they would assist in the relief effort.

Within hours, an Indian Air Force C-130 landed at at Katmandu’s airport with 39 disaster relief workers and 3.5 metric tons of supplies, according to a spokesman for the Ministry of Defense.

As the ground began to shake, several buildings collapsed in the center of the capital, the ancient Old Kathmandu, including centuries-old temples and towers, said resident Prachanda Sual.

Among them was the Dharahara Tower, one of Katmandu’s landmarks built by Nepal’s royal rulers in the 1800s and a UNESCO-recognized historical monument. It was reduced to rubble and there were reports of people trapped underneath. The Katmandu Valley is densely populated with nearly 2.5 million people, and the quality of buildings is often poor.

Dhany Osman, an editor with The Straits Times of Singapore said he was at Katmandu’s Tribhuvan International Airport when the quake struck.

“As bits of the ceiling began to fall, passengers who were waiting for their flights began to panic and started running out of the terminal, with some tripping over each other,” he wrote. “Despite the nearest exit door being just 10 (yards) away, a group of Nepali men smashed open a glass panel and climbed out of it. I tried telling people around me to calm down but they kept shoving each other to get out.”

Although the extent of the damage and the scale of the disaster are yet to be ascertained, the quake will likely put a huge strain on the resources of this poor country best known for Everest, the highest mountain in the world. The economy of Nepal, a nation of 27.8 million people, is heavily dependent on tourism, principally trekking and Himalayan mountain-climbing.

Robin Trygg, a climber, was in a base camp on the Cho Oyu mountain at an altitude of 18,480 feet when he felt the quake.

“We were sitting in the tent and drinking tea when all of a sudden the earth began shaking. We didn’t understand what happened,” he told the Swedish news agency TT by telephone.

A Swedish woman, Jenny Adhikari, who lives in Nepal, told the Swedish newspaperAftonbladet that she was riding a bus in the town of Melamchi when the earth began to move.

“A huge stone crashed only about 20 (yards) from the bus,” she was quoted as saying. “All the houses around me have tumbled down. I think there are lot of people who have died,” she told the newspaper by telephone. Melamchi is about 30 miles northeast of Kathmandu.

Although a major plate boundary with a history of large- to great-sized earthquakes, large earthquakes in this area are rare in the documented historical era, the USGS reports. Over the past century, just four events of magnitude 6.0 or larger have occurred within about 150 miles of Saturday’s earthquake.

One, a magnitude-6.9 earthquake in August 1988 about 150 miles to the southeast of the latest quake, caused close to 1,500 fatalities, according to the USGS.

The largest magnitude-8.0 event known as the 1934 Nepal-Bihar earthquake, occurred in a similar location to the 1988 event. It severely damaged Kathmandu, and is thought to have caused around 10,600 deaths.

An earthquake’s power increases by 10 times with each increase in the number of its scale. A magnitude-7.0 quake is capable of widespread and heavy damage while a magnitude-8.0 can cause tremendous damage.

This means Saturday’s earthquake — the same magnitude as the one that hit San Francisco in 1906 — was 22 times more powerful than the 7.0 quake that devastated Haiti in 2010.