“Manguicidio”: A woman gets an apartment after hitting Venezuelan president with a mango 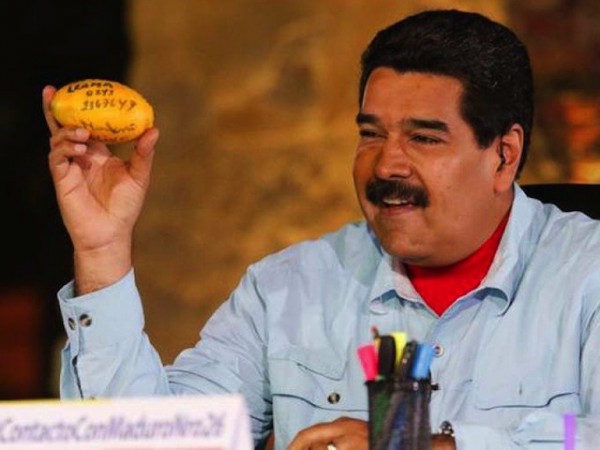 How would you get your nation’s president to hear you out? Put your name and number on a mango and hit him in the head with it?

No? Then you’re not Marleni Olivo, who did exactly that, and in return is getting the new apartment she was asking for, said Venezuelan President Nicolas Maduro.

Olivo, 54, saw her opportunity when Maduro visited Anzoategui, the state where she lives.

Maduro, a former bus driver, drove a bus to a rally Wednesday where he was meeting with supporters. The president had the window open, the better to greet people attending the rally.

Olivo had written a message on a mango — “If you can, call me,” — along with her name and phone number. She got as close as she could and, as the bus passed, she tossed the fruit at Maduro.

In a video that has gone viral in Venezuela, Maduro is shown lowering his head when he is hit, just above the left ear. He then calmly picks up the mango and holds it up to the crowd.

Later in the evening, the president mentioned the incident in one of his customary live TV broadcasts and displayed the infamous mango as proof.

“Marleni Olivo,” Maduro said. “We’re going to invite her to my [TV and radio] show, ‘In Touch with Maduro.’ She had a housing problem, right? And, Marleni, I have approved it already, as part of the Great Housing Mission of Venezuela, you will get an apartment and it will be given to you in the next few hours. Tomorrow, no later than the day after tomorrow, we will give it to you.”

Maduro also joked that he had something in common with the mango. The word “maduro” in Spanish means ripe.

Olivo told local media her intention was to toss the president a note, as others in the crowd were doing.

“I didn’t have paper available at that moment,” she told El Pitazo TV. “What I had was a mango that I was about to eat because I was hungry.”

Maduro’s critics are calling the incident a a play on the words “mango” and “magnicidio,” a Spanish word meaning assassination of a powerful leader. In Venezuela’s extremely polarized political climate, Maduro frequently talks about his belief that the opposition is conspiring to target him for assassination.

But the mango-thrower says she had no evil intent.

“My dream is to own a home before I die,” she told El Pitazo TV, adding that she had been very ill recently, that she suffers from diabetes and hypertension.

And now her dream is about come true, a dream that would not have been possible without her boldness and a little help from a tasty mango.