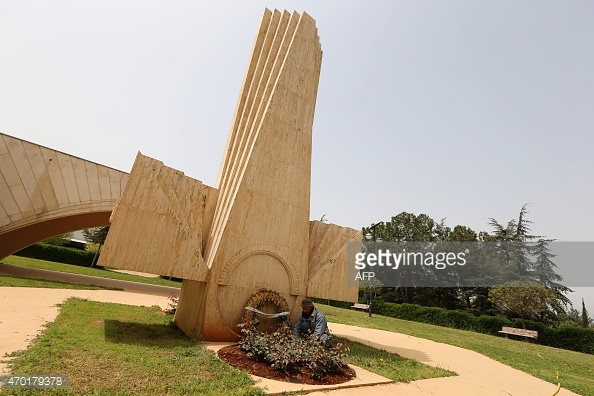 The priest unlocks the door to a musty room, home to the ghosts of Moses Mountain, a lost place where determined townsfolk once gathered with hunting rifles and faced down an imperial army.

A glass-and-wood frame secures a white flag emblazoned with a fading red cross, a symbol of resistance and survival celebrated in Armenian lore. Laid out on tables and shelves are prized artifacts: a chalice, rusted farming implements, an ancient rifle and black funeral boxes holding remains of some of the 18 “martyrs” who were killed fighting the Turks 100 years ago.

“Here, you can feel our ancestors’ presence,” said Father Ashod Karakashian, 82, who came here from Turkey as a boy and has few direct memories of his homeland. But he lives daily with its legacy.

As ethnic Armenians worldwide mark the centennial of a genocide at the hands of Ottoman Turks, this town in Lebanon’s Bekaa Valley embodies one of that mournful chapter’s most compelling back stories: the unlikely resistance in 1915, at the height of Ottoman mass killings and expulsions, of residents of a cluster of outgunned Armenian villages in what is now southern Turkey’s Hatay province.

From the high ground of the mountain, their ammunition and food growing ever scarce, they held off the Turks for more than a month and a half.

On Friday, Armenian communities across the world, including Anjar, are holding commemorative events. In Turkey, however, President Recep Tayyip Erdogan has derided as “nonsense” a statement by Pope Francis that the events of a century ago are “widely considered the first genocide of the 20th century.”

Little remains in Turkey of the once-thriving Armenian enclave of six villages near Musa Dagh, or Moses Mountain, a few miles from the Mediterranean coast. But it is here, in Lebanon, where the memory lives on and is honored, and where the descendants of the defenders of Musa Dagh have made a home.

Anjar is a quiet, orderly community of neatly laid-out streets, many lined with palm and pine trees. Home to 3,000 people, almost all ethnic Armenians and Christians, the town hosts three churches and a smattering of restaurants and shops. A sense of calm prosperity reigns in a region not especially known for tranquillity and order.

At an elevation of almost 3,000 feet, the town is spared the worst of the Levantine summer heat. Snow falls in the winter. Anjar’s borders drift to mountains along the Syrian frontier, just a few miles away, and elsewhere meld into apple orchards and other farmland.

The staccato soundtrack of modern-day war resounds periodically from Syria. But few appear to take much notice of the not-so-distant detonations of mortar rounds and artillery fire.

Amid the sense of prosperous normality, the only thing that might cause a double take these days are the banners billowing in the wind, their language plainly accusatory. “Guilty,” blares a message in English from a large rectangular banner, featuring stylized blood dripping from the red letters stamped below a Turkish flag. “With Full Charges For Murdering 1,500,000 Armenians.” Other posters declare: “We Remember and We Demand.”

Lebanon and Syria were major destinations for Armenians escaping the Turks during the World War I era. Armenians remain thankful of the welcome they received in the two predominantly Muslim Arab nations. Communities such as the Beirut neighborhood of Bourj Hammoud remain bastions of Armenian culture, closely preserved despite the region’s periodic sectarian-fueled internal strife.

“Because everyone spoke Armenian in Bourj Hammoud, the Armenian culture was completely preserved there, even as the civil war raged,” said Garo Ghazarian, a Bourj Hammoud native who is a Los Angeles-area lawyer and prominent Armenian activist in California.

In Syria, the punishing war has exacted a heavy toll on Armenian communities there.

Some ethnic Armenians now see history repeating itself in Syria. Armenian industrialists exiled from the city of Aleppo, once Syria’s economic engine, recall matter-of-factly how Turkey-backed Syrian rebels stripped their factories bare and sold the spoils on the black market in nearby Turkey.

“The war in Syria has been a huge blow against the Armenian diaspora,” said Garabed Pamboukian, the mayor of Anjar. He also cited last year’s takeover of Kasab, a historic Armenian town in Syria, by Turkey-based rebels; it was later recaptured by government forces.

“The Turks are continuing the genocide,” he said.

In the summer of 1915, word of the brutal Ottoman campaign spread to the isolated Armenian zone of Musa Dagh, home to about 5,000 people.

Rather than submit to the Turks, the residents of Musa Dagh decided to fight back. From July to September, they stood their ground. Eighteen people died in the fight.

The epic Armenian struggle against the Turks was captured by Franz Werfel, a Czech German writer and contemporary of Franz Kafka, in his 1930s novel “The Forty Days of Musa Dagh,” which became a bestseller in the United States and was banned in Nazi Germany, where persecution of entire populations became state policy. Werfel emerged as a hero to the Armenian community worldwide.

The flag stored in a room near St. Paul’s Church in Anjar played a more than symbolic role, Anjar historians say. French warships, which were blockading the Ottoman coast at the time, spotted the distinctive flag fluttering from the peak of Moses Mountain, according to Armenian accounts of the incident.

With food and ammunition running out on the mountain, a French rescue party landed and helped evacuate the survivors. They were taken to Port Said, Egypt. Many men enlisted in the Allied war effort against the German-Turkish axis.

When the war ended, the Ottoman Empire defeated, the denizens of Musa Dagh returned to their homeland, then part of an autonomous postwar province of Syria under French mandate rule. They rebuilt and settled into renewed lives. But global politics intervened as the Republic of Turkey sought to recoup the area.

In 1939, the French acceded and the villages of Musa Dagh became part of Turkey. But the residents had long memories. Most refused to live under Turkish rule. With French help, they relocated temporarily to an area on the Syrian coast before being moved to a place called Anjar, a swampy, mosquito-infested plain in the Bekaa.

French authorities and Armenian donors helped pay for the land and the relocation. About 4,500 people were moved, according to the official town history, and started new lives in the inhospitable terrain. Hundreds succumbed early on to typhoid, malaria and other ailments.

Initially, many settlers camped out in tents on what turned out to be the ruins of an 8th century summer resort town of the Umayyad Islamic caliphate. The ancient city was partially excavated in subsequent decades; it is now a seldom-visited UNESCO World Heritage site.

“People think this is a war zone,” said a melancholy guide at the magnificent site, largely abandoned on a recent visit.

The town was divided into six districts, each named after the abandoned villages back in Turkey. Despite many hurdles, Anjar prospered. Residents maintained their distinctive Armenian dialect and taught the young the history of their ancestors’ exile. Many Anjarians did well in sundry businesses — jewelry, money exchange, clothing shops and other concerns — and brought wealth to the town.

Anjar soon had its own diaspora, its sons and daughters moving to Europe, the Americas, Australia and Africa.

“We never forgot that we were from Anjar and what our parents and grandparents went through,” said Shogher Chorbajian, a native of Anjar and software developer who lives in Glendale.

Mayor Pamboukian, who once worked in the cashew trade in West Africa, stays in touch with the global Anjar community, rattling off the names of far-flung branches.

“We have people from Anjar everywhere, in the world,” said Pamboukian, whose daughter lives in Pasadena.

Adorning the mayor’s office walls are photos of some of the town pioneers, along with examples of local art, including an oil painting depicting the white flag with the red cross rising from the snow-capped summit of Moses Mountain.

Minister Bou Saab’s announcement came on Monday during the unveiling ceremony of the memorial statue of the Armenian Genocide in Fanar.

Lebanon is the only Arab country that has recognized the Armenian Genocide.