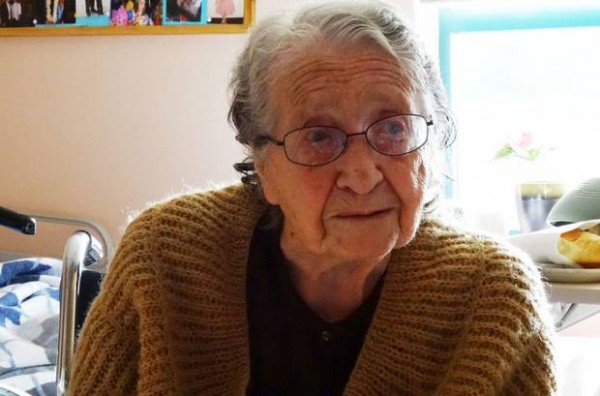 101 year old Yevnigue Salibian is one of the few remaining survivors of what some call the Armenian genocide.

A baby when the atrocities took place, she has clear recollections of the events that began in 1915.

Between 1915 and 1917, hundreds of thousands of ethnic Armenians died at the hands of government troops in the Ottoman Empire, the predecessor to modern-day Turkey.

However, Turkey says that there was no genocide and that the dead were victims of World War I, and that ethnic Turks also suffered in the conflict.

She remains confused about why anybody would want to harm her people. And she’s angry that the Turkish government still hasn’t recognized the atrocity.

“The Turks will deny, deny, deny,” she said. “But they were hungry for the blood of Armenians.”

Yevnigue Salibian was born Jan. 14, 1914, one of five children in a middle-class family in the town of Aintab.Her family were friends with the mayor so they stayed in their home when war broke out, while they watched their neighbours being thrown out but eventually had to flee. She was among the last Christians to leave Aintab..  After fleeing their home, she lived in Lebanon until 1976 when the civil war began . Her family then  fled to the United States  .  She reportedly lost one of her children from a previous marriage  in a tragic road accident in 1953 , when she was living in Beirut .

Deeply religious, Yevnigue learned to speak English by comparing versions of the Bible.

Now living in a home for elderly Armenians in Los Angeles. Salibian needs a wheelchair to get around. But aside from some trouble hearing, she appears in good health. She quickly breaks into song and inquisitively peppers visitors with questions about their own lives.  Yevnigue has lost count of her great grandchildren – there are at least 22 so far – but she is happy in her cheerful Armenian nursing home.

She loves America, Yevnigue says.  “It is a free place. All people come from everywhere to America. But why is our President a Muslim?” She asked