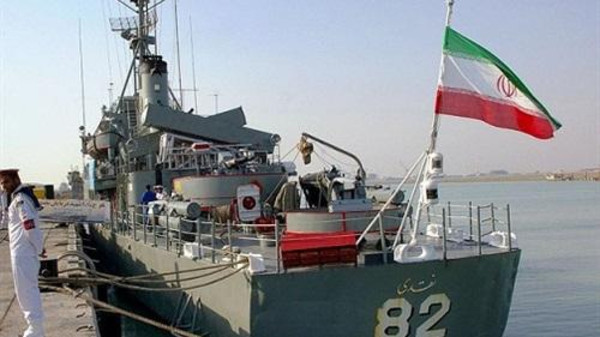 Iran is widely known to be providing political, military and financial support for Yemen’s Shiite Houthi rebels. An Iranian ship unloaded more than 180 tons of weapons and military equipment at a Houthi-controlled port in western Yemen, last March
Share:

Iran has long supported Houthi rebels in Yemen with arms, training and financing.

Now, as a convoy of Iranian ships heads toward Yemen’s Gulf of Aden, a U.S. carrier group is headed there as well to intercept any potential weapons transfers to the rebels, who have seized much of Yemen territory and are fighting the U.S.-backed government there, according to the Pentagon.

Iran’s involvement in Yemen goes back years, and ranges from political and religious support for Houthi leaders to military training and active involvement in the fighting, according to media reports and Yemen analysts.

Secretary of State John Kerry told PBS Newshour on April 8 that Iran had sent “a number of flights every single week” to Yemen with supplies for the Houthis. “Iran needs to recognize that the U.S. is not going to stand by while the region is destabilized or while people engage in overt warfare across lines, international boundaries and other countries,” he said.

The U.N. Security Council has called for an arms embargo against the Houthi rebels.

The Iranian embassy to the United Nations did not have an official statement.

The Houthis are Shiite Muslims, as are most Iranians. Yemen’s government has been dominated by Sunni Muslims and has been supported by Sunni nations such as Saudi Arabia and Egypt.

David Schenker, director of Arab politics at the Washington Institute for Near East Policy, said Iran has supported the Houthis for years in many different ways. Iran sent fighter pilots to Lebanon, where they received Lebanese passports and then traveled to Yemen to join the fighting in advance of the Houthi takeover earlier this year, Schenker said, citing sources in the Lebanese government.

When Houthi spiritual leader Abdel-Malek Al-Shami was seriously injured in a mosque bombing by Islamic State militants in Yemen, he was flown to Tehran, for treatment, though he later died, Schenker said. In addition, “many (Houthi) leaders have studied in seminaries linked to Iran.” Schenker said.

If the U.S. ships intercept the Iranian convoy, they may find it is carrying humanitarian supplies to Yemen to relieve a populace facing massive shortages, Schenker said. Iran for years has provided humanitarian and military assistance to Shiite militias in Iraq and Lebanon, and in the past it has provided similar assistance to Sunni militias fighting Israel in the Gaza Strip.

“There is the possibility of a humanitarian crisis of immense proportions,” he said. “Nobody wants to go into Yemen to do this kind of work. But one thing we’ve learned over the past few years is that the Iranians always stand by their friends.”

Other reports of Iranian support for the Houthis:

• In March, Qatar’s Al Jazeera and UAE’s Al Arabiya reported that an Iranian cargo ship unloaded 160 to 180 tons of military equipment in the Red Sea port of Al-Saleef. Houthi militias closed the port to employees and unloaded the supplies, according to Al-Arabiya.

• In December, Reuters cited unnamed senior Iranian officials saying that the Iranian Revolutionary Guard had hundreds of military personnel in Yemen training Houthi fighters. About 100 Houthis traveled to Iran in 2014 for training, and the pace of money and arms transfers has increased since the seizure of Yemen’s capital, Sanaa this year, the source told Reuters.

• In January 2013, Yemen’s military intercepted a shipment of weapons that appeared to have come from an Iranian Revolutionary Guard source, according to reports by CNN and Reuters. The cache included surface-to-air missiles, high explosives and rocket propelled grenades and appeared destined for Houthi insurgents.

• In October, 2009, Yemen’s navy seized an Iranian ship loaded with anti-tank weapons off its northwest coast in the Red Sea, according to Al-Arabiya. Five Iranians and one Indian aboard the ship were weapons experts sent to Yemen to replace other Iranians injured while fighting alongside Houthi rebels, Yemeni officials told the news agency.

David Weinberg, a Yemen watcher at the Foundation for the Defense of Democracies, a think tank in Washington, said the Houthis could not have conquered Sanaa without massive support from Iran.

“Tehran does not exercise command and control over Ansar Allah (the Houthi militia),” Weinberg said. “But credible reports confirm that it has been providing on-the-ground advising …training overseas, major sums of money and weapons by the literal ton.”