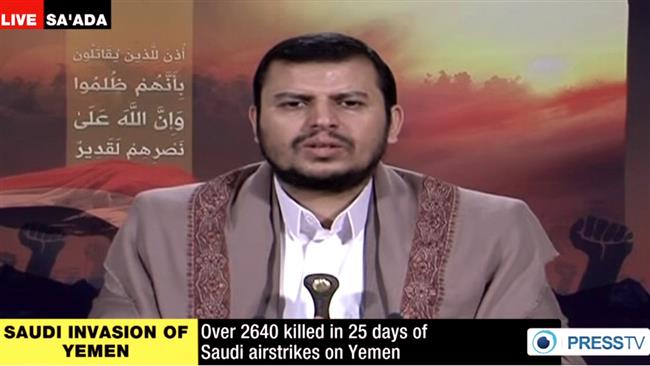 The leader of the Houthis is copying almost verbatim the speeches of the head of Lebanon’s Hezbollah organization, according to two Gulf intellectuals.

Al-Ansari described Al-Houthi’s arguments as weak, full of mistakes and delusional. He said the Yemeni rebel leader has denied that there have been atrocities committed by him and his followers and blamed the coalition forces for the deaths of citizens.

Al-Ansari said it was clear that Al-Houthi was simply regurgitating the arguments of Nasrallah because he used the words Israel, the United States and Zionism tens of times during the speech.

He said Al-Houthi was trying to garner sympathy with these arguments but Arabs would not be taken in by “such empty slogans.” His tactics threaten to turn his country into a black spot in the Arabian Peninsula and a hotspot for terrorist groups, said Al-Ansari.

“But thank God that Custodian of the Two Holy Mosques intervened and took the decision to launch Operation Decisive Storm before everything was lost,” said Al-Ansari.

He accused Iran of trying to export its revolution for 36 years, and having allocated huge funds for this purpose, which he described as a waste of its people’s resources.

Mohammad Al-Remaihi, a Kuwaiti intellectual, said the speech delivered by Al-Houthi was a copy of Nasrallah’s speeches, and recorded at an earlier time because there was no time frame articulated for Operation Decisive Storm even though the battle is in its fourth week.

“In his speech, Al-Houthi underestimates the intelligence of the Yemeni people. He spoke repeatedly and incoherently about the US and Israel,” said Al-Rumaihi.

He said that Al-Houthi was trying to manipulate the emotions of Yemeni citizens. “He spoke about the rights of southern Yemenis while attacking Aden with all kinds of weapons,” he said.

Al-Remaihi said the Iranians have always wanted to expand regionally but Decisive Storm has forced them to seek dialogue on the Gulf nations’ terms and conditions.