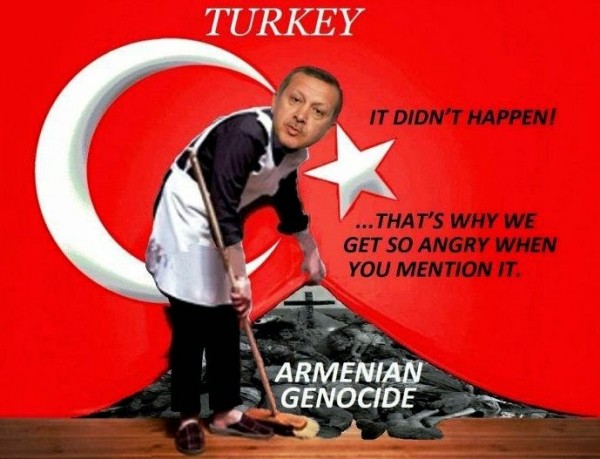 A couple of years ago, when Armenians throughout the world began making plans for the Armenian Genocide Centennial, they had two major concerns: What kind of events to organize that would be most appropriate for this solemn occasion, and how to conceal their plans from the Turkish government so it would be unable to undermine or disrupt them.

Little did Armenians know that Turkish leaders would inadvertently end up being our best “ally,” and instead of disrupting Armenians’ Centennial plans, they would make preposterous statements that would globally propagate the Armenian Genocide beyond anyone’s wildest expectations.

A Hollywood scriptwriter could not have done a better job than what Erdogan as prime minister and then president did to ensure that the Armenian Centennial is commemorated with the greatest possible audience in the world.

Long before the start of the Centennial year, Erdogan set the stage by undermining his own credibility and that of his country by making outlandish declarations: He claimed that Muslims discovered America before Columbus, and that it was impossible for Muslims to commit genocide, and he told TV host Charlie Rose that since there are still Armenians in Istanbul there could not have been a genocide.

Erdogan went on to shut down YouTube and Twitter because he disliked some of their content; had a teenage student arrested for writing an essay the Modern Day Sultan didn’t approve; jailed journalists and cartoonists for criticizing his policies; prosecuted Muslim cleric Fethullah Gulen’s followers and high-ranking military officers under the pretext that they were plotting against His Highness; ordered the shooting of peaceful protesters in Istanbul’s Gezi Park; and instructed his son during a secretly recorded phone conversation on how to conceal tens of millions of dollars in cash!

With his harsh statements and rude outbursts, Erdogan managed to antagonize leaders of many of the countries he dealt with, including the United States, France, Germany, Iran, Iraq, Egypt, Greece, Cyprus, Russia, and Syria. In effect, he turned his foreign policy of “zero problems with neighbors” to “zero neighbors without problems!”

At the start of this year, as the Genocide Centennial drew near, Erdogan shifted to high gear. He came up with the “brilliant” idea of rescheduling the Gallipoli commemoration to April 24, and invited leaders of more than 100 countries to Turkey in order to steal the limelight away from the Armenian Genocide commemorations in Yerevan on that date. The Turkish president then sought to rewrite history by accusing Armenians of changing the Genocide Centennial date to April 24!

Such childish maneuvers did not go unnoticed by the international community. Countless articles were written exposing Erdogan’s dirty tricks. Instead of undermining the Armenian commemorations, the Turkish leader ended up propagating the Genocide Centennial, long before Armenians had held a single event!

Then came the memorable sermon of Pope Francis on April 12, accusing Turkey of committing “the first genocide of the 20th century” against the Armenian people. In response, Erdogan recalled his ambassador from the Vatican, and then, along with his normally cool-headed Prime Minister Davutoglu and the entire cast of Turkish officialdom, started insulting the Pope, the Catholic Church, and even Argentina, the Pope’s birthplace! Thus, within a few days, Turkey’s leaders managed to antagonize over a billion Catholics around the world.

Erdogan warned the Pope that he would take additional actions against the Catholic Church, implying that he would convert Istanbul’s ancient Greek Hagia Sophia Church to a mosque. Should he take such an extreme action, he would be antagonizing the rest of the Christian world against Turkey.

Within days of the Pope’s history-making sermon, the European Parliament adopted yet another resolution acknowledging the Armenian Genocide. Meanwhile, Erdogan continued his anti-European and anti-Christian diatribe by accusing Europeans of being anti-Turkish and anti-Islam. Naturally, Europeans began to question how such a lunatic leader could ever join the European family of nations!

*Harut Sassounian is the publisher of The California Courier, a weekly newspaper based in Glendale, Calif. He is the president of the United Armenian Fund, a coalition of the seven largest Armenian-American organizations. He has been decorated by the president and prime minister of the Republic of Armenia, and the heads of the Armenian Apostolic and Catholic churches. He is also the recipient of the Ellis Island Medal of Honor.