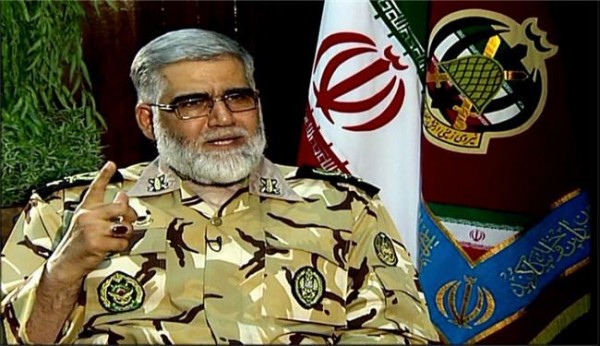 The commander of Iran’s ground forces Ahmad Reza Bordestan warned on Sunday that the war in Yemen would spill into neighboring Saudi Arabia and engulf the kingdom unless Riyadh stops its bombings raids there.

“There will be explosions in Saudi Arabia through rockets fired into its territory and the price of this (conflict) will be heavy for Saudi authorities,” Bordestan said in an interview with Iran’s state-owned Al-Alam TV.

“With their past experience and abilities the Yemeni army can hit hard at Saudi Arabia,” he warned.

Traditional regional rivals Iran and Saudi Arabia are on opposite ends in the war in Yemen: Tehran backs Shiite Houthi rebels that have driven the Yemeni president into exile in Saudi Arabia; the Saudis back the government and have been leading bombing raids against the Houthis for more than three weeks.

Bordestan said that air strikes cannot win the war in Yemen and that only ground troops can decide the outcome of such a conflict. It “will drain Saudi Arabia and they do not have any experience in this kind of war,” he said.

The Iranian commander added that Yemeni fighters are “united, resilient and brave” and that despite the bombing raids the Houthis continue to take over more territory.

Bordestan rejected Saudi claims that Tehran was supplying arms to the Houthis.  “Through their naval and land surveillance they (Saudis) know that this is nothing but a lie,” he said. “Iran has not sent any weapons or ammunition to Yemen and we have dedicated our efforts to sending medical supplies.”

Bordestan said that his country would not go to war with Saudi Arabia “because Saudi Arabia is a friend and a neighbor.”

To illustrate that ties between the two countries were normal, he said that the military attaché at the Saudi embassy in Tehran had attended a military parade in the Iranian capital on the country’s recent Army Day.

“We want to have relations with Saudi Arabia and we don’t want relations between our countries to be bloody,” he said.

He added, however, that Iran is facing new threats in the region and is therefore upgrading its military capacity, focusing particularly on the air force and building unmanned planes and drones.

“The Iranian armed forces have to upgrade their defense capability to the size of the threats,” he told Al-Alam. “Though our main focus is defensive, it does not mean we are not ready to fight back any threat or are unprepared for any crisis.”