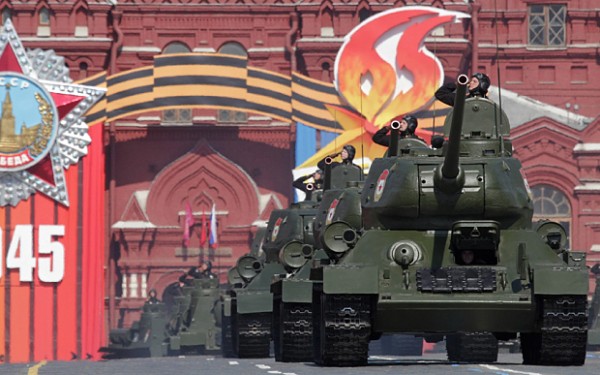 Alarming: Putin is positioning tanks across Europe Photo: EPA/SERGEI CHIRIKOV
Share:
The commander of the US army in Europe has warned that Nato must remain united in the face of a “real threat” from Russia.

“It’s not an assumption. There is a Russian threat,” Lt-Gen Frederick “Ben” Hodges said.

“You’ve got the Russian ambassador threatening that Denmark will be a nuclear target if it participates in any missile defence programme. And when you look at the unsafe way Russian aircraft are flying without transponders in proximity to civilian aircraft, that’s not professional conduct.”

Gen Hodges spoke to the Telegraph on the sidelines of a military debriefing after an exercise to move live Patriot missiles 750 miles across Europe by road and deploy them on the outskirts of Warsaw.

The sight of a US military convoy crossing the German-Polish border more than 20 years after the end of the Cold War made international headlines and brought traffic to a standstill as people posed for selfies beside the troops.

The intention of such a highly visible deployment was to send a signal, Gen Hodges said.

“That’s exactly what it was about, reassuring our allies,” he said.

Gen Hodges pointed to recent Russian decisions to move Iskandar ballistic missiles to its Kaliningrad enclave, between Lithuania and Poland, and long-range nuclear-capable bombers to Crimea.

“I don’t think a military confrontation is inevitable. But you have to be militarily ready in order to enable effective diplomacy,” he said.

“The best insurance we have against a showdown is that Nato stands together.”

Since taking over command of the US army in Europe last year, Gen Hodges has found himself on the front line of an increasingly nervous stand-off with Vladimir Putin’s Russia.

Eastern European countries are looking to Nato, and the US in particular, for reassurance that they will not be left to face Russian aggression alone.

A year after it pulled its last tank out of Europe, the US is sending hundreds of tanks and heavy fighting vehicles back to the continent, and Gen Hodges is in the middle of talks over where to position them.

But he has also assumed command at a time when many Western European countries are cutting their military budgets, and relying ever more on the US for their defence.

“I think the question for each country to ask is: are they security consumers or security providers?” Gen Hodges said. “Do they bring capabilities the alliance needs?”

He declined to be drawn on the UK’s defence budget, and the major parties’ failure to commit to Nato’s spending target of 2 per cent of GDP.

“My experience of the UK is principally of the British army, and they are one of the best armies in the world,” he said. “They have extremely capable officers and NCOs.

“The relationship between the US and the UK is as strong as ever and we are always looking for ways to strengthen it. We need the capability that the British bring. They’ve been by our side in everything we’ve done.

“We’ve got our own challenges in the US army. Globally countries are facing pressure on defence spending, including the US.

“I’m confident the UK will live up to its responsibilities.”

In recent years, while Western countries have been cutting their defence budgets, Russia has been spending heavily on modernising its military.

“We’re not interested in a fair fight with anyone,” Gen Hodges said. “We want to have overmatch in all systems. I don’t think that we’ve fallen behind but Russia has closed the gap in certain capabilities. We don’t want them to close that gap.”

The recent involvement of Russian forces in fighting in eastern Ukraine has shown that they have made huge advances, particularly in electronic warfare, Gen Hodges said.

But he doesn’t think this is the start of a new Cold War.

“That was a different situation, with gigantic forces and large numbers of nuclear weapons,” he said. “The only thing that is similar now is that Russia and Nato have different views about what the security environment in Europe should be.

“I don’t think it’s the same as the Cold War. We did very specific things then that are no longer relevant. We don’t need 300,000 soldiers in Europe. Nobody can afford that any more.

“We want to see Russia back in the international community and cooperating against Islamic terrorism and on Iran’s nuclear ambitions. That’s different from the Cold War.”

Gen Hodges has an easy manner with the men under his command, making jokes and asking the opinions of the most junior privates, as well as senior officers.

He has combat experience as a brigade commander in Iraq, but in his current role he has to deal with different challenges.

“I’m sure they’re not going to line up Russian tanks and go rolling into another country,” he said. “They don’t want a military confrontation with Nato. Our alliance is the most successful alliance in history and it has a lot of capability.”

Russia will not risk an open attack on a Nato member, he believes, for fear the alliance will invoke Article V of its treaty, under which an attack on one member is an attack on all.

Instead, the danger is that Russia will seek to put pressure on Nato members on its borders through other means.

“There’s information, economic pressure, border violations. There are different ways of keeping the pressure up. They don’t want a clear attack, they want a situation where all 28 [Nato member countries] won’t say there’s a clear attack.”

He pointed to the large Russian-speaking populations in the Baltic countries, and the economic power Russia has as a major consumer of eastern European agricultural produce, as possible avenues Mr Putin may try to exploit.

But he said that Nato remains united in the face of Russian aggression.

“If President Putin’s objective is to fracture the alliance, then he’s going about it the wrong way,” Gen Hodges said. “At the Wales summit there was a unity of the alliance I have not seen before, and it came about because of Russia’s illegal annexation of Crimea and its use of force to change the borders of a sovereign country, Ukraine. It was a direct response to Russia’s behaviour in Crimea.”

He points to recent moves by traditionally neutral Sweden and Finland to cooperate more closely on defence with Nato members Norway, Denmark and Iceland.

“Nobody’s trying to join Russia. There’s no country scurrying to get under Russia’s protective umbrella,” he said.

“Why do so many countries want to join the EU or Nato? It’s about values. They want security and prosperity.

“Russia wants to make it difficult for countries that were affiliated with the USSR or the Warsaw Pact to join the West. The way they see it they’re entitled to a role, to a sphere of influence.

“I think the position of the West is that this idea of a sphere of influence is not applicable in the 21st century. In the 21st century countries have the right to decide for themselves what is right for them and what kind of country they want to be. They’ve made the European choice. That’s what this is all about.”

Since taking up his command, Gen Hodges has been outspoken over the Russian threat in a way that is rare for a serving general.

“I think I understand my role. I don’t make policy for the US or the alliance. I carry out policy,” he said.

He has chosen to speak out because he fears the Russia is going unchallenged in the information war, he said.

“We talk about DIME: diplomacy, information, military and economy. An important aspect of how Russia operates is how they use information.

“They use information the way they use infantry and missiles. They’re not burdened by the truth. Most of the independent media has left Russia and a large percentage is government-owned or -dominated. They don’t have to worry about congressional or parliamentary oversight. There’s a constant bombardment of information.”

In his last interview before his death on Monday, Günter Grass, the Nobel-winning German author, said he feared that humanity was “sleepwalking” towards another World War.

Gen Hodges disagreed. “I think we were sleepwalking a few years ago when we thought Russia wanted to be a part of the international community,” he said. “They were with us in Bosnia. We actually have a mechanism for them to cooperate with Nato.