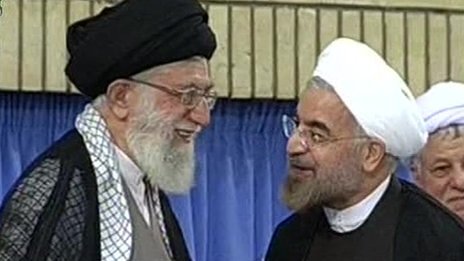 Iran’s president has criticised Saudi Arabia for continuing to carry out air offensive against the Houthi rebels, warning that its regional rival will harvest “the hatred” it is sowing in Yemen.

“You [Saudi Arabia] planted the seeds of hatred in the hearts of people’s region and you will see the response sooner or later,” Hassan Rouhani told a military parade in capital Tehran.

On Saturday, fighting along Saudi ‘s border with Yemen killed another soldier from the kingdom, the Saudi-led coalition spokesman said.

The soldier is the seventh to die since coalition aircraft on March 26 began air strikes.

Coalition spokesman Brigadier General Ahmed al-Assiri told reporters there was continuous fighting from Friday afternoon until late that night along the frontier in the southwestern Saudi region of Najran.

“One of our Saudi soldiers was killed,” Assiri said.

The Saudi military also reported that coalition air strikes were launched in Taiz, targeting the presidential palace, which it claimed was being used as a storage depot for munitions and fuel by Houthi rebels.

Assiri said at least 20 Houthi rebels were killed in Taiz, and some died in gunfights with

Assiri also announced that the state of Djibouti has opened its airspace for coalition forces to use.

“We will use its sea and air space. This will reinforce our aid work. We will be able to move aid from the port of Djibouti to the Yemeni port.”

The Saudi-led air strikes are already on its fourth week. Saudi said it is targeting the Houthi rebels, whom they accused of being allied with Iran.

In an interview with Al Jazeera, Afzal Ashraf, a defence and security analyst in London, said that despite the ongoing Saudi-led air strikes, there are no signs that the Houthi rebels are backing down.

Ashraf said that the Houthis are trying to provoke the Saudis to launch a ground invasion.

“The Houthis want to transform this into an insurgency, where they will use lighter arms in urban areas,” he said. “They want to make it very difficult for the Saudis.”

He also said that Saudi Arabia is not close to its goal of reinstalling Abd Rabu Mansour Hadi as president of Yemen.

Accuses Saudi of arming and funding terrorists in Lebanon and Middle East
Rouhani accused also Saudi Arabia on Saturday of providing weapons and funding to terrorist groups in the Middle East, including Lebanon.

“What does providing financial assistance and weapons to terrorists in Syria, Lebanon and Iraq mean?” Rouhani asked.

Iran is supporting Syrian President Bashar Assad, Hezbollah and the Iraqi government in its fight against Sunni extremists, including the Islamic State group and al-Nusra Front.

Tehran says Saudi Arabia and several other Middle East governments support the IS.

Iran’s help goes only to Hezbollah and directly without involving any of the Lebanese banks and institutions, according to the observers