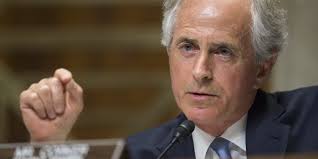 President Obama will sign bipartisan compromise legislation on Iran if it emerges from committee as now formulated, the White House said, after Republican and Democratic leaders of the Senate Foreign Relations Committee crafted an accord with overwhelming support.

While Mr. Obama is not “particularly thrilled” with the bill, said Josh Earnest, the White House spokesman, he finds the new proposal put together by the top Republican and Democrat on the Senate Foreign Relations Committee a more acceptable measure that takes into account the concerns he had raised about the original.

“What we have made clear to Democrats and Republicans in the Senate Foreign Relations Committee is that the president would be willing to sign the proposed compromise that is working its way through the committee today,” Mr. Earnest told reporters.

The compromise between Senator Bob Corker of Tennessee, the committee’s chairman, and Senator Benjamin L. Cardin of Maryland, its ranking Democrat, would shorten a review period for a final Iran nuclear deal and soften language that would make the lifting of sanctions dependent on Iran’s ending support for terrorism.

The agreement almost certainly means Congress — over the White House’s stern objections — will muscle its way into nuclear negotiations that Mr. Obama sees as a legacy-defining foreign policy achievement. It still must be voted on this afternoon, but leaders in both parties expressed their support. One senior Democratic aide said the bill would have overwhelming, veto-proof support in the full Senate.

“This is a really sound piece of legislation,” Mr. Corker said. “I’m very proud of it and it’s my hope that it passes overwhelmingly.”

Mr. Cardin, who served as a bridge between the White House and Republicans, said, “I think this is the right way for Congress to take up this issue. I think this is congressional prerogative, and we’re the ones who imposed the sanctions.”

With committee passage, the Senate would most likely approve it this month. Republican leaders in the House promised swift action on the Senate bill.

“Congress absolutely should have the opportunity to review this deal,” House Speaker John A. Boehner of Ohio said Tuesday. “We shouldn’t just count on the administration, who appears to want a deal at any cost.”

He added, “We’re asking for a commitment that people will pursue the process that’s contemplated in this bill,” he said.

Some Democrats said Republicans could still upset the delicate compromise, but key lawmakers appeared ready to accept the deal as it.

Mr. Earnest said the compromise addressed some of the objections that the president raised to the original version by shortening the review period and softening the terrorism provision.

Moreover, rather than calling for a decision on the overall agreement, the modified bill now essentially sets up a future vote on lifting congressionally imposed sanctions, something the White House has always acknowledged would be needed, Mr. Earnest said. “The compromise would set up a vote to vote later on those specific congressional sanctions,” he said. “It would not be an up-or-down vote on the deal.”

Assuming White House concerns remain addressed in the version passed by the committee, he added, “We’ve gone from a piece of legislation that the president would veto to a piece of legislation that’s undergone substantial revision such that it’s now in the form of a compromise that the president is willing to sign. That would certainly be an improvement.”

Mr. Earnest added that the White House was asking that Republican and Democratic leaders agree to make this bill the only one that addresses the Iran deal, blocking any efforts to try to insert conditions into other legislation. “We’re asking for a commitment that people will pursue the process that’s contemplated in this bill,” he said.