Greece denied it was preparing for a debt default, but fast running out of cash 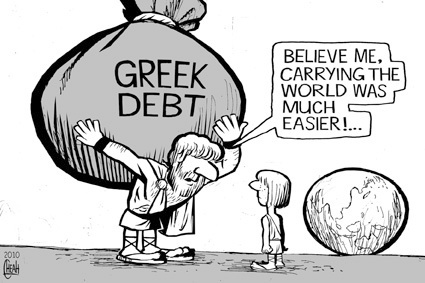 Greece denied on Monday a report by the Financial Times that it was preparing for a debt default if it did not reach a deal with its creditors by the end of the month and said the negotiations were proceeding “swiftly” towards a solution.

Athens has been kept afloat by bailouts totaling 240 billion euros from the European Union and the International Monetary Fund since 2010, but has not received any loans since last August.

It is fast running out of cash and must strike a deal on reforms with its lenders before further money is disbursed.

Citing people familiar with the matter, the Financial Times reported that Athens may withhold payments to the tune of 2.5 billion euros ($2.64 billion) to the IMF due in May and June, if no agreement is struck.

“Greece … is not preparing for any debt default and the same goes for its lenders. Negotiations are proceeding swiftly towards a mutually beneficial solution,” Prime Minister Alexis Tsipras’ office said in a statement.

“What appears to rankle is that the Greek government is determined to put an end to austerity policies.”

The FT report said that in the short-term, a default would almost certainly lead to the suspension of emergency European Central Bank liquidity help for the Greek financial sector, the closure of Greek banks, capital controls and wider economic instability.

The newspaper said warning of a debt default may be a negotiating tactic aimed at extracting the easiest possible conditions from Greece’s creditors.

Asked about the FT report, a senior EU official in Brussels told Reuters: “I believe this reflects the divergence of views within the current Greek government rather than an agreed negotiation position and tactics.”

“April 24 will once again prove not to be the end of the world,” said the statement from Tsipras’ office.

Earlier on Monday, European Commission Vice President Valdis Dombrovskis told Reuters that Greece was not moving fast enough to draw up and implement structural reforms and that there was limited time to prevent it running out of cash.