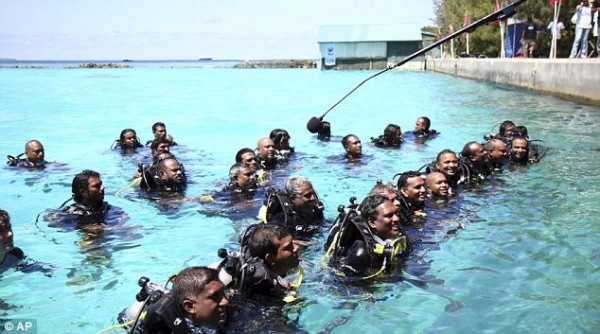 Supporters of jailed former Maldives president Mohamed Nasheed held an underwater protest on Saturday to push for the release of the tropical archipelago’s first democratically elected leader, after he was sentenced to 13 years in prison last month.

Around 100 divers, dressed in yellow “Free Nasheed” T-shirts, dived 3 meters (10 feet) off the coast of the capital city Male for a protest streamed live on the Internet.

Nasheed was jailed for illegally ordering the arrest of a judge in a trial that has triggered widespread international criticism and spotlighted political instability in a country known as an island paradise popular with wealthy tourists.

“We are letting people know we are against tyranny and we are with Nasheed,” said diver Fahud, who declined to give his second name.

President Abdulla Yameen, whose half-brother lost power to Nasheed in 2008, has rejected accusations Nasheed’s trial was politically motivated and said the legal process was fair.

This week the former president announced a high-profile team of human rights lawyers including Amal Clooney, wife of actor George Clooney, was taking up his case.

The arrest of the judge in 2012 triggered a crisis which led to Nasheed’s ousting in disputed circumstances. Eighteen months later Yameen narrowly beat Nasheed in an election.

On Friday, former defense minister Tholath Ibrahim was also sentenced to 10 years in prison for his role in the arrest of the judge.