Yemen crisis deepens as U.S. warns it won’t ‘stand by’ while Iran supports the Houthis 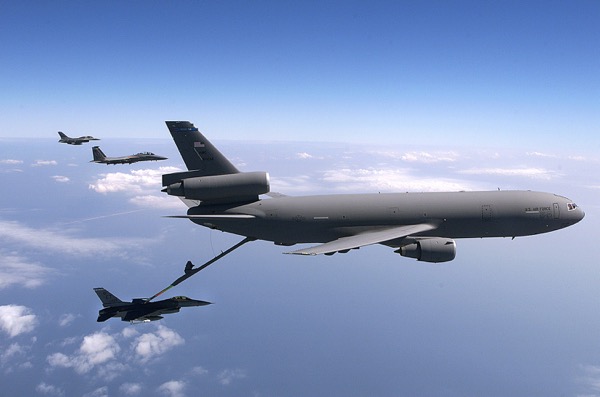 An F-16 Fighting Falcon from the 40th Flight Test Squadron, Eglin Air Force Base, Florida, refuels from a KC-135 Stratotanker. The Pentagon said it had started daily aerial refueling for warplanes in the Saudi -led coalition.
Share:

The Middle East crisis deepened today as the US warned it will not ‘stand by’ while Iran supports rebels in Yemen.

Secretary of State John Kerry said Washington would not accept foreign interference in the country in a direct criticism of Tehran’s backing of Shiite Houthi fighters.

It comes as a Saudi-led coalition continues to pound anti-government forces in Yemen at the start of a third week of bombing.

Mr Kerry told PBS television: ‘There have been – there are, obviously – flights coming from Iran. Every single week there are flights from Iran and we’ve traced it and know this.

‘Iran needs to recognise that the United States is not going to stand by while the region is destabilised or while people engage in overt warfare across lines, international boundaries in other countries.’

The United States has backed the Saudi-led campaign, which launched air strikes last month as the rebels advanced on Yemen’s main southern city of Aden after seizing the capital Sanaa.

President Abedrabbo Mansour Hadi fled Aden for Saudi Arabia during the Houthi advance and the city has since seen heavy clashes between pro and anti-government forces.

Riyadh has accused Tehran, the major Shiite power, of backing the rebels in a bid to establish a pro-Iran state on its doorstep.

But Iranian Foreign Minister Mohammed Javad Zarif insisted his government wanted a swift end to the fighting, which has cost more than 640 lives since March 19, according to the World Health Organization.

Mr Kerry, fresh from world powers striking a framework agreement with Iran on its nuclear programme, said Washington was not looking for confrontation with Tehran.

‘But we’re not going to step away from our alliances and our friendships and the need to stand with those who feel threatened as a consequence of the choices that Iran might be making.’

In another sign of growing US support for the Saudi effort, the Pentagon said it had started daily aerial refueling for warplanes in the coalition.

‘We will have a tanker sortie every day,’ Warren said, adding that all flights will be outside of Yemeni air space.

The air strikes killed at least 14 rebel fighters in Aden overnight Thursday at positions near the northern edge of the city, a source in pro-government forces told AFP.

Air strikes also hit a military camp in the southern Shabwa province that was seized by the Houthis’ main allies – security forces who have remained loyal to former strongman Ali Abdullah Saleh, a local official said.

The official had no information on casualties among the forces loyal to Saleh, who has been accused of joining with the Houthis after being ousted from power in 2012 after an Arab Spring-inspired uprising.

Yemen has been wracked by conflict since Saleh’s ouster, with Hadi unable to assert government authority in a deeply tribal country riven by divisions.

As well as the Houthis, who hail from Yemen’s north, the government has struggled against Al-Qaeda in the Arabian Peninsula (AQAP), considered the most dangerous of the jihadist network’s branches.

Authorities in Yemen had for years allowed Washington to carry out a drone war against AQAP but US forces pulled out of the country amid the latest unrest.

Al-Qaeda has taken advantage of the chaos to seize control of some areas and carried out a series of deadly attacks on both government forces and the Houthis.

As the fighting and air campaign drag on, concern has been growing for what aid workers say is a mounting humanitarian crisis.

Some aid trickled in to Aden by ship on Wednesday but efforts by the International Committee of the Red Cross to organise flights of cargo planes into Sanaa have so far failed.

In Aden, witnesses have said the situation is dire, with bodies lying in the streets and mosques calling through loudspeakers for help.

Diplomatic efforts have stepped up to resolve the conflict, with the Iranian and Pakistani foreign ministers pledging to work to find a negotiated solution.

Zarif laid out a four-stage plan for talks, calling for an immediate ceasefire followed by humanitarian assistance, dialogue among Yemenis and the formation of an ‘all-inclusive government’.

Turkish President Recep Tayyip Erdogan was also quoted on Thursday as calling for a regional effort to end the fighting.

‘The groups in Yemen should meet and work on possible solution. Saudi Arabia, Turkey and Iran should be involved in efforts for a diplomatic solution,’ Erdogan was quoted as saying by Turkish media.