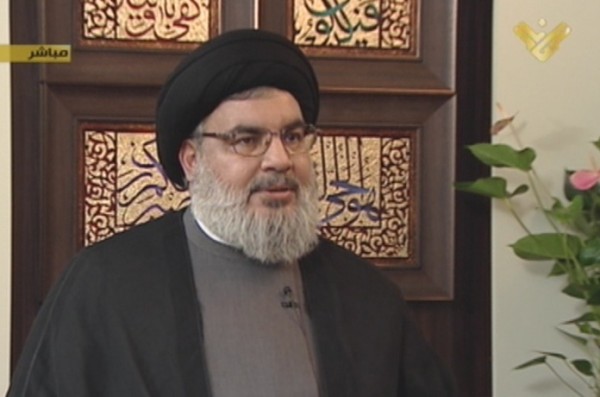 The leader of Lebanon’s Hezbollah said on Monday that a framework nuclear agreement that Iran reached with world powers last week rules out the spectre of regional war.

“There is no doubt that the Iranian nuclear deal will be big and important to the region,” Sayyed Hassan Nasrallah said in an interview with Syria’s al-Ikhbariya television.

“The agreement, God willing, rules out the spectre of regional war and world war,” he said.

The tentative accord, struck on Thursday after eight days of talks in Switzerland, clears the way for a settlement to allay Western fears that Iran could build an atomic bomb, with economic sanctions on Tehran being lifted in return.

Nasrallah said the accord would prevent conflict as “the Israeli enemy was always threatening to bomb Iranian facilities and that bombing would definitely lead to a regional war.”

The Shi’ite Muslim Hezbollah was founded with Iranian help in the 1980s to fight Israel in Lebanon. It has grown into a powerful political and military force and is fighting alongside President Bashar al-Assad’s army in Syria’s civil war.

Syria making the decsions
Hezbollah leader Hassan Nasrallah dubbed Israel on Monday as “an enemy that has no compassion in his heart.”

Most of Nasrallah’s interview dealt with the civil war raging Assad and rebels trying to oust him, but the Hezbollah leader also discussed the alleged assassination of Jihad Mughniyeh in the Syrian Golan Heights in January, and the organization’s revenge attack that claimed the lives of two IDF soldiers.

“We wanted to show there’s a new situation in which the rules of engagement don’t apply,” Nasrallah said.

“We chose to attack Israel from Lebanon because we wanted to send a message for both our enemies and allies to internalize. The response from Lebanon was important for strategic reasons. Had we reacted from Syria, it would’ve had less of an impact strategically,” he added.

The Hezbollah leader hinted another war between Israel and Hezbollah was in the cards, and warned there will be significant loss of lives: “The nations worthy of living are those willing to make sacrifices.” He said.

Talking about the civil war in Syria, Nasrallah claimed the fight against Assad failed because the important areas were still under the control of the Syrian regime and its allies.

“The losses we suffered during the war in Syria were expected. The number of casualties being reported by the media is inflated.” He claimed

He said Hezbollah chose to interfere in the Syrian civil war, and was not dragged into it. According to Nasrallah, Hezbollah knew the war would be long and tough before entering it, unlike many who believed this would be an uprising that could quickly bring Assad down.

“Hezbollah is not making independent decisions in the war there,” he said. “The military decisions in Syria are Syrian decisions, we’re just aiding. The military commanders consult with us, but the decision is eventually theirs.”

But according to observers , neither Syria nor Hezbollah are making the decisions. The decisions are reportedly made by Nasrallah’s boss the the Iranian Revolutionary Guard Quds force division leader General Qassem Suleimani.

Nasrallah predicted Monday that Saudi Arabia will suffer a “major defeat” in the Yemeni conflict, as he stressed that “the war on Syria” has failed.

“Saudi Arabia will suffer a major defeat that will have an impact on its domestic situation and the entire region,” said Nasrallah .

He noted that the Saudi-led airstrikes have “miserably failed” to change the situation on the ground in Yemen, pointing out that the the Iranian backed Shiite Houthi rebels and their allies are still advancing.

“The Yemenis were going to turn their country into a state qualified for being alongside the resistance movements in the region,” said Nasrallah, referring to the Huthis’ lightning power grab that preceded the Saudi-led intervention.

“The Yemeni people support the Palestinian cause and they were interacting with what’s going on in Lebanon, Palestine and Syria.Today, there is a Saudi-American aggression against Yemen,” he added.

The Saudi Arabia -led coalition of about 10 counties launched its airstrikes in Yemen on March 25 to defend Yemeni President Abedrabbo Mansur Hadi’s government.

The military move was criticized by Iran and its proxy Hezbollah.