Obama calls Iran deal ‘Once in a Lifetime’ Opportunity 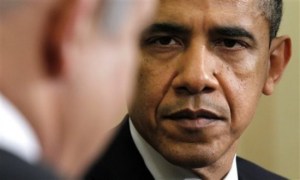 President Barack Obama is defending a framework nuclear understanding with Iran as a once-in-a-lifetime opportunity to prevent a bomb and bring longer-term security to the Middle East, insisting the U.S. will stand in defense of Israel.

In a weekend interview with The New York Times, Obama argues the risks of a deal are far outweighed by potential gains if it deters Iran’s nuclear weapons aspirations, since the U.S. is a far superior military power who can protect its core security interests. He said the U.S. will make sure the deal does not threaten Israel’s own military advantage.

The notion that Iran is undeterrable is “simply not the case,” Obama told The Times’ Thomas Friedman. “And so for us to say, ‘Let’s try’ — understanding that we’re preserving all our options, that we’re not naive — but if in fact we can resolve these issues diplomatically, we are more likely to be safe, more likely to be secure, in a better position to protect our allies.”

Obama added that he was “absolutely committed” to making sure Israel maintains “their qualitative military edge” and was willing to make clear that “if Israel were to be attacked by any state, that we would stand by them.”

Obama expressed concern about how the talks have strained U.S.-Israel relations, indicating how he takes it personally when he’s accused of being anti-Israel.

“Part of what has always made the U.S.-Israeli relationship so special is that it has transcended party, and I think that has to be preserved. There has to be the ability for me to disagree with a policy on settlements, for example, without being viewed as … opposing Israel.