Lebanese truckers continue to experience problems in shipping via Syria 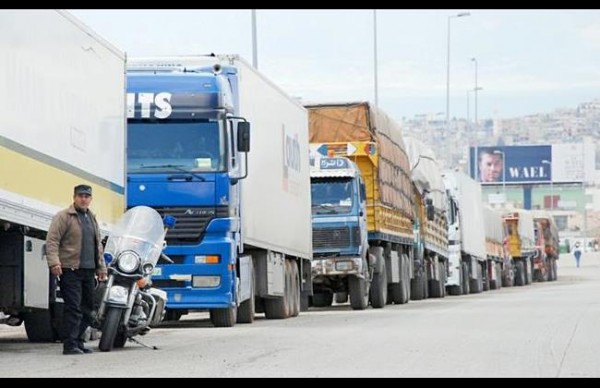 Six  Lebanese truck drivers were able to cross to Lebanon  via al-MAsnaa border crossing  on Sunday after being stranded for four days  at the Jordanian – Syrian Nasib  border crossing , Voice of Lebanon radio reported .

Ahmad Alam, the mayor of Seer al-Dinnieh and owner of eight of the trucks that were prevented from crossing the border, also confirmed that six truck drivers have entered Lebanon and confirmed that authorities have lost contact with two truck drivers whose whereabouts are currently unknown.

Syrian rebel group Nusra Front  reportedly took control of the Jordanian – Syrian Nasib border crossing Wednesday night, a day after Jordanian authorities had announced the shutting of the borders . Their  gunmen took the opportunity to loot the trucks as well as the transit area and are  reportedly holding several Lebanese truck drivers hostage .

National News Agency   reported that a number of Lebanese truck drivers are also stranded on the Saudi-Jordanian border.

“They urged the Lebanese government and Saudi authorities to provide a ferry or ship to return them to Lebanon along with their trucks, after the Nasib border crossing between Jordan and Syria was closed,” NNA said.

“The drivers said they no longer have enough money to survive after they ran out of food, and that they are suffering a very difficult situation on the Saudi border,” NNA added and  noted that the deadline for the trucks’ departure from Saudi territory was nearing and that they would be “fined” if they didn’t leave on time.

The truckers called on the Lebanese government to “exert quick efforts to return them home along with their trucks,” NNA said.

On Saturday, head of the union of Arab tribes Sheikh Jassem al-Askar said in comments to media outlets that he is carrying out a series of contacts with a number of tribe leaders, who wield influence in Syria, to ensure the release of the Lebanese truck drivers.

At least 30 Lebanese truck drivers were stranded on the Syrian-Jordanian border, in the free zone, after rebels seized the Syrian side, prompting Amman to close a frontier crossing.

Omar Al-Ali, head of the Lebanese refrigerated truck union, had confirmed the news.

Ali said the drivers were trying to cross from Syria into Jordan, but were stranded after Amman closed the Nasib crossing.

He said that the drivers hail from the towns of Saadnayel and Bar Elias, while others are from the northern city of Tripoli.

The Syrian Observatory for Human Rights, a Britain-based monitor, said around 300 cars and trucks were stuck at the crossing, and reported looting of the border passage by rebels and local residents.

There are endless stories about the suffering of Lebanese truckers who use Syria to ship mainly  agricultural products to the Arabian Gulf countries , such as Saudi Arabia, Qatar, Kuwait, Oman and UAE . They are endless  stories  about bribes, ransom, corruption, looting and humiliation by the Syrians.

The Syrian regime always used  for decades the border  crossings to blackmail the Lebanese truckers and now of course the Nusra is doing the same , even though the circumstances may be different specially because Jordan this time closed its border.

There are so many ways to bypass the border specially because Lebanon has an advantage of being at the Mediterranean sea and has several  ports that could be used  for shipping to any place in the world , even to Syria .

The sad part about the whole affair is that Lebanon starting dealing with the issue back in 2013 but someone must have dropped the ball since.

Mohammad Saleh, the head of the chamber, said the first roll-on-roll-off ship  took 5 days to reach  the port of Aqaba ,  Jordan

“The escalation of the Syrian crisis and the difficulty of shipping Lebanese products through the country … forced us to launch this initiative ,” a statement by the chamber said and added that each week 2 ships will leave from Sidon .

“Lebanese trucks will be able to continue their trips to destination countries using the same land routes as before,” the statement  added.

Antoine Howayek, head of the Lebanese Farmers’ Association, praised the step, which he said was very positive .

Howayek said  back then the cost per truck for the trip to Aqaba would be $2,000, which he said was higher than the cost of land shipment.

Howayek said the Turkish operator of the ship had agreed to lower the price from $2,700 per truck, following mediation by the chambers of commerce and several ministries.

But the relatively high price of the shipping will harm the competitiveness of agricultural produce, Howayek said, adding that the Investment Development Authority of Lebanon should offer subsidies to exporters.

“A subsidy of $1,000 [per truck] would boost the competitiveness of Lebanese produce to normal in the Gulf Cooperation Council, where competition has been increasing for several kinds of produce,” he said.

Howayek was not even back then  optimistic about future exports via Syria.

“It is really important that we continue putting contingency plans,  that deal with the closure of the Syrian borders before exporters. At least for now,” he said.

Editor’s note: It is worthwhile to note that Ya Libnan has been calling for using the sea as an alternative export route for nearly 10 years.

In June 2007 when the fighting between Fatah al-Islam militants and the Lebanese army erupted ,Syria closed the borders in the north of Lebanon, because the Lebanese accused the Syrians of supporting the militants.

He already built  replica Phoenician boat which he launched from the  Phoenician   island of Arwad near Tartus , Syria in August 2008, and from there through the Suez Canal, and into the Red Sea.

Phase two was launched in August 2009 to sail round the Horn of Africa and down the east coast.   The voyage continued up the west coast of Africa, through the Straits of Gibraltar and across the Mediterranean to return to the Lebanon and Syria in October 2010. In total the circumnavigation covered over 20,000 nautical miles.

Beale aims to demonstrate that the Phoenicians — the ancient Mediterranean civilization that prospered from 1500BC to 300BC — had the capability to sail to the U.S.; a theory disputed by historians.

“It is one of the greatest voyages of mankind and if anyone could have done it [before Columbus], it was the Phoenicians,” said Beale.

“Of all the ancient civilizations they were the greatest seafarers — Lebanon had cedar trees perfect for building strong boats, they were the first to use iron nails, and they had knowledge of astrology and currents.” Beale added.

So using the sea should not be difficult for the Lebanese after all ! We are supposed to be the “Greatest seafarers”