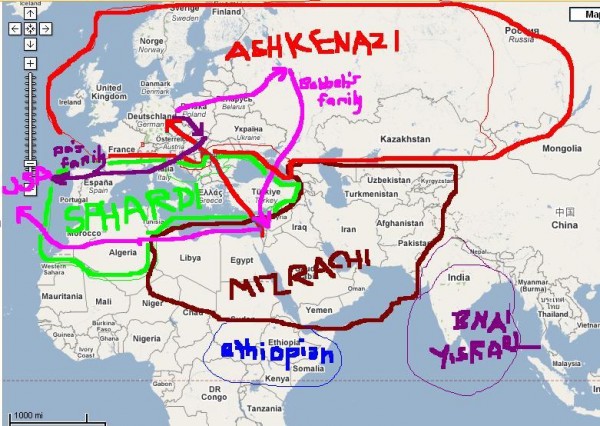 Israel’s visceral election campaign has exposed a rift that many here thought had long subsided — the deep-seated schism between Jews of European and Middle Eastern descent.

That dynamic has been going on for a while but passions have run particularly high this time, with jarring results. Since Netanyahu’s win, the sides have been exchanging insults that have not been heard in public in a generation — with the Mizrahi voters accused of being primitive and Ashkenazi voters viewed as elitist.

The dispute goes back to Israel’s earliest days of independence. Arriving from Arabic-speaking countries in the Middle East and North Africa after Israel’s establishment in 1948, many Mizrahi immigrants were sent to shantytown transit camps and largely sidelined by the European leaders of the founding Labor Party.

They found their political savior in Likud’s Menachem Begin — even though he was himself of Polish Jewish descent. With consummate skill the longtime opposition leader cultivated an outsiders’ alliance that appealed to their sense of deprivation — and with massive Mizrahi backing he swept to power in 1977 to break nearly 30 years of Labor rule.

The exact population breakdown is hard to calculate because intermarriage is now quite common. But Mizrahi or part-Mizrahi Jews make up roughly half of Israel’s Jewish population.

They have long complained of discrimination by the European-descended elite that traditionally dominated government, military and business institutions.

The complaints have diminished, as has some of the domination, but gaps remain. There has never been a Mizrahi prime minister, for example. Mizrahim far outnumber Ashkenazim in prison — and are far outnumbered in academia.

They also account for many more poor people — and yet the poorest towns, where they predominate, tend to support Likud and forgive it the capitalist policies than have often not served their economic interests.

“Our parents and grandparents have voted only Likud since the upheaval” of 1977, said Malkiram Bashari, who traces his roots to Yemen.

The prospect of voting for Labor? “It’s too hard. There is just too much baggage there,” said Bashari, 52.

Such sentiments are nothing less than mind-boggling for affluent Ashkenazi voters — who cannot grasp why Mizrahim would support Likud in an election when the country’s high cost of living was supposedly a central issue.

They also often argue that Netanyahu’s hard-line policies toward the Palestinians prevent a peace agreement that would bring on an economic boom that would benefit Mizrahim.

Yet voting patterns from this month’s election indicate that Netanyahu largely owes his re-election to the last-minute mobilization of Likud’s Mizrahi supporters.

Many had pledged to turn their back on Likud to protest its economic policies or because of disdain for Netanyahu’s lengthy rule and perceived decadent lifestyle.

But when the moment of truth arrived — and after Netanyahu sparked turnout by warning of Arab voters coming out in “droves” — poorer, heavily Mizrahi “development towns” voted en masse once more for Likud over the Zionist Union, Labor’s modern-day incarnation.

In Sderot, for example, a border town with Gaza that has been battered by both rockets and unemployment and has long complained of government neglect, Likud earned 43 percent of the vote, to the Zionist Union’s 7 percent.

“The politics of identity are stronger than any economic interest,” said Gideon Rahat of Jerusalem’s Hebrew University and the Israel Democracy Institute.

He said the ethnic vote goes both ways and helps explain why even the wealthiest Ashkenazim continue to vote Labor — which favors high taxes on the rich — rather than the more capitalist Likud.

For years, as Mizrahi Jews made inroads throughout Israeli society, the rift with the Ashkenazim took a back seat to the conflicts between Arabs and Jews, and between secular and religious Jews.

But the ethnic genie was let out of the bottle at a pre-election left-wing rally in Tel Aviv, where Ashkenazi artist Yair Garbuz complained about a “handful of amulet kissers that have taken over the country.” Other condescending remarks, including a Facebook post by leftist writer Alona Kimhi that referred to right-wing voters as “Neanderthals” and suggested they “drink cyanide,” sparked further outrage.

The Shas party, which caters to religious Mizrahi Jews, tapped into the controversial comments and launched a campaign provocatively titled: “A Mizrahi votes for a Mizrahi.”

The bitterness continued after the vote. The nadir came during a TV morning show, when a radical professor known for his online tirades against Mizrahi immigration lashed out at a fellow panelist that “nothing bad would have happened had your parents been left to rot in Morocco.”

Nehemia Shtrasler, a columnist for the liberal Haaretz daily newspaper and an Ashkenazi Jew, said the left’s historic discrimination of Mizrahim had come back to bite it.

“It wasn’t the diplomatic-security issue that won the election,” he wrote. “It was all about ethnicity, and revenge was served up cold at the ballot box.”

Netanyahu, whose hard-line rhetoric taps into Mizrahi disdain for the Arabs who mistreated them in their countries of origin, “speaks not only fluent English, but also fluent Mizrahi,” wrote Avi Issacharoff in the Times of Israel website.

In Rosh Ha’ayin, a former dusty town now on the outskirts of the greater Tel Aviv metropolis, these sentiments ring true.

“Bibi knows our mess. He is good for us,” said 32-year-old Shalom Tairy, who runs a hummus restaurant in the Yemenite neighborhood of Shabazi, referring to Netanyahu by his nickname.

Sitting next door, drinking Turkish coffee and smoking cigarettes at a local convenience store, the neighborhood elders say Shabazi has always been a Likud stronghold and that is how it will remain.

They angrily recalled how Mizrahim were denied good jobs, passed over for promotions in the military and police, beaten in school and prevented a good education. They insisted that Israel’s founding father David Ben-Gurion didn’t even want them to come.

“We should be regarded like Holocaust survivors,” said Uri Barzilai, 60. “We were treated like third-rate citizens and we still feel damaged.”