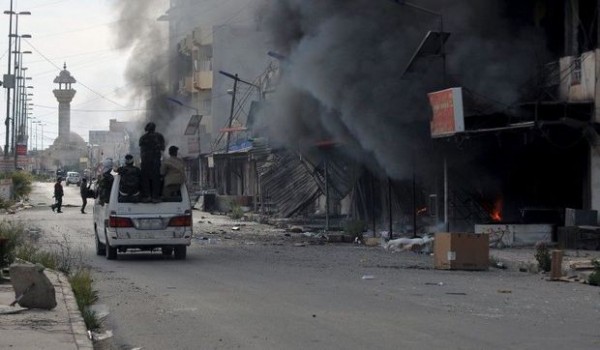 Members of the Iranian Hashid Shaabi militia forces ride in a vehicle as smoke rises in shops at al-Qadisiya neighborhood, north of Tikrit April 3, 2015. REUTERS/Stringer
Share:

On April 1, the city of Tikrit was liberated from the extremist group Islamic State. The Iranian-led Shi’ite militia and allied Iraqi central government Security force, after a month-long battle, had expelled the barbarous Sunni radicals.

Then, some of the liberators took revenge.

Near the charred, bullet-scarred government headquarters, two federal policemen flanked a suspected Islamic State fighter. Urged on by a furious mob, the two officers took out knives and repeatedly stabbed the man in the neck and slit his throat. The killing was witnessed by two Reuters correspondents.

Since its recapture two days ago, the Sunni city of Tikrit has been the scene of violence and looting. In addition to the killing of the extremist combatant, Reuters correspondents also saw a convoy of Shi’ite paramilitary fighters – the government’s partners in liberating the city – drag a corpse through the streets behind their car.

Local officials said the mayhem continues. Two security officers, speaking on condition of anonymity, said on Friday that dozens of homes had been torched in the city. They added that they had witnessed the looting of stores by Shi’ite militiamen.

Later Friday, Ahmed al-Kraim, head of the Salahuddin Provincial Council, told Reuters that mobs had burned down “hundreds of houses” and looted shops over the past two days. Government security forces, he said, were afraid to confront the mobs. Kraim said he left the city late Friday afternoon because the situation was spinning out of control.

“Our city was burnt in front of our eyes. We can’t control what is going on,” Kraim said.

Those reports could not be immediately confirmed.

It wasn’t supposed to be this way. Islamic State, an Al Qaeda offshoot that arose from the chaos in Iraq and Syria, slaughtered thousands and seized much of northern and centralIraq last year. The government offensive was meant not only to dislodge the group but also to transcend the fundamental divide in fractured Iraq: the enmity between the now-ruling Shi’ite majority and the country’s formerly dominant Sunni minority.

Officials close to Prime Minister Haidar al-Abadi, a moderate Shi’ite, had described the Tikrit campaign as a chance to demonstrate his government’s independence from one source of its power: Iraqi Shi’ite militias backed by Shi’ite Iran and advised by Iranian military officers. Sunnis deeply mistrust and fear these paramilitaries, accusing them of summary executions and vandalism. But Abadi has had to rely on the Shi’ite militias on the battlefield, as Iraq’s regular military deserted en masse last summer in the Islamic State onslaught.

The militia groups spearheaded the start of the Tikrit assault in early March. But after two weeks of fighting, Abadi enforced a pause. Asserting his power over the Shi’ite militias, he called in U.S. airstrikes.

Now, the looting and violence in Tikrit threaten to tarnish Abadi’s victory. It risks signaling to Sunni Iraqis that the central government is weak and not trustworthy enough to recapture other territory held by Islamic State, including the much larger city of Mosul. Tikrit, hometown of the late dictator Saddam Hussein, is in the Sunni heartland of Iraq.

At stake is much more than future votes: Islamic State’s rapid conquests in 2014 were made possible by support from Sunni tribal forces and ordinary citizens. They were convinced that the government – under Abadi’s predecessor, Nuri al-Maliki – viewed their community as terrorists. If Sunnis dislike what they see in Tikrit, they may not back the government’s efforts against Islamic State.

On Friday, the government sought to assure all sides that it will enforce order. Abadi issued a statement calling on the security forces to arrest anyone breaking the law.

Asked to comment on the scenes witnessed by Reuters, his spokesman Rafid Jaboori said he would not address individual incidents but said: “People’s lives and property are priorities, whether in this operation or in the overall military effort to liberate the rest ofIraq.”

Sunni lawmakers who visited Tikrit complained that events have spun out of control since the security forces and militias retook the city.

Parliamentarian Mutashar al-Samarrai credited the government with orchestrating a smooth entrance into Tikrit. But he said that some Shi’ite paramilitary factions had exploited the situation. “I believe this happened on purpose to disrupt the government’s achievement in Tikrit,” Samarrai said. “This is a struggle between the (paramilitaries) and the government for control.”

Neighborhoods entered by the Iraqi forces and Shi’ite paramilitaries have been burnt, including parts of neighboring Dour and Auja, the birthplace of Saddam Hussein.

Security forces blame Islamic State for rigging houses with explosives, while Sunnis suspect the Shi’ite militias and the army and police of deliberately torching their homes.

Looting has also been a problem. Shi’ite paramilitary fighters in pickup trucks raced through the city carrying goods that appeared to have been looted from homes and government offices.

The vehicles were crammed with refrigerators, air conditioners, computer printers, and furniture. A young militia fighter rode on a red bicycle, gleefully shouting: “I always dreamed of having a bike like this as a kid.”

Brigadier General Maan, the main spokesman for the government forces, said police were stopping vehicles that appeared to have stolen items. “We are doing our best to impose the law.”

Passions were running high among the Shi’ite militia groups before the assault. Islamic State beheaded people and carried out other atrocities in the lands it conquered. In particular, the militias wanted revenge for Islamic State’s killing in June of hundreds of Iraqi soldiers captured from Camp Speicher, a base near Tikrit. It was an event that came to symbolize the Sunni jihadists’ barbarism.

Despite Baghdad’s efforts to rein in the paramilitaries, the fingerprints of the Shi’ite militias – and of Iran itself – were all over the operation’s final hours.

On Wednesday, as Tikrit fell, militiamen were racing to stencil their names on houses in order to take credit for the victory.

An Iranian fighter, with a Kalashnikov rifle slung over his shoulder and a picture of Iranian Supreme Leader Ayatollah Ali Khamenei pinned to his chest, bragging about Tehran’s role in the campaign.

“I am proud to participate in the battle to liberate Tikrit,” said the man, who called himself Sheik Dawood. “Iran and Iraq are one state now.”

An Iranian fighter, with a Kalashnikov rifle slung over his shoulder and a picture of Iranian Supreme Leader Ayatollah Ali Khamenei pinned to his chest, bragging about Tehran’s role in the campaign.
“I am proud to participate in the battle to liberate Tikrit,” said the man, who called himself Sheik Dawood. “Iran and Iraq are one state now.”

On the edge of Tikrit in the hours after the city’s fall, a Shi’ite paramilitary group drove in a convoy past several police cars. The militiamen had strung the corpse of a suspected Islamic State fighter from the back of a white Toyota pickup truck. The cable dragging the man snapped, and the vehicle stopped.

The men got out to retie the bullet-riddled corpse. As they fastened the cable tighter to the body, a song about their victory over Islamic State played on the truck’s stereo. Then they sped off, the corpse kicking up a cloud of dust.

The policemen standing nearby did nothing.

On Wednesday afternoon, Reuters saw two suspected Islamic State detainees – identified as an Egyptian and a Sudanese national – in a room in a government building. The Egyptian and the Sudanese were then taken outside by police intelligence.

Word spread that the two suspected Islamic State prisoners were being escorted out. Federal policemen, who had lost an officer named Colonel Imad the previous day in a bombing, flocked around the detainees.

The interior ministry spokesman, Brigadier Maan, said the Egyptian had stabbed an Iraqi police officer, which explains the anger against him. Reuters couldn’t verify that claim.

“WE WANT TO AVENGE OUR COLONEL”

The two prisoners were put in the back of a pickup truck. As the vehicle tried to leave, the crowd blocked it.

The mob was screaming: “We want to avenge our Lieutenant Colonel.”

Shi’ite paramilitary men swarmed the area. The street filled with more than 20 federal police. Gunfire erupted. Bullets ricocheted. At least one of the Shi’ite fighters was wounded, and began bleeding from the leg.

The pickup truck tried to back up. People in the mob grabbed one of the prisoners from the truck, the Egyptian, and pulled him out.

The Egyptian sat silently at the feet of two big policemen in their twenties. His eyes filled with fear. He was surrounded by a few dozen people, a mix of federal police and Shi’ite militiamen.

“He is Daesh, and we should take revenge for Colonel Imad,” the two federal police officers yelled, using a derogatory Arabic term for Islamic State.

One of the policemen held a black-handled knife with a four-to-five-inch blade. The other gripped a folding knife, with a three-inch blade and a brown handle.

The policemen laid the Egyptian’s head over the curb. Then one of the police pushed the other out of the way and he swung his whole body down, landing the knife into the Egyptian’s neck.

The cop lifted the knife and thrust the blade in the Egyptian’s neck a second time. Blood gushed out, staining the boots of the cheering onlookers.

The killer started to saw through the neck, but it was slow-going. He lifted the blade again and slammed it into the Egyptian’s neck another four times. Then he sawed back and forth.

“BRING ME A CABLE”

Their fellow policemen chanted: “We took revenge for Colonel Imad.”

The killer lifted himself up the street pole next to the dying man so he could address his comrades: “Colonel Imad was a brave man. Colonel Imad didn’t deserve to die at the hands of dirty Daesh. This is a message to Colonel Imad’s family don’t be sad, raise your heads.”

His friend with the folding knife kept trying to stab the Egyptian, with no success. He cried out: “I need a sharp knife. I want to behead this dirty Daesh.”

Finally the men found a cable, fastened it to the dead man’s feet and dangled him from the pole.

One policeman grew upset at the spectacle and shouted: “There are dozens of media here. This is not the suitable time. Why do you want to embarrass us?”

The mob ignored him and continued trying to hoist the body. White bone stuck out from his slashed neck, his head flopped from side to side, and the blood continued to gush forth.