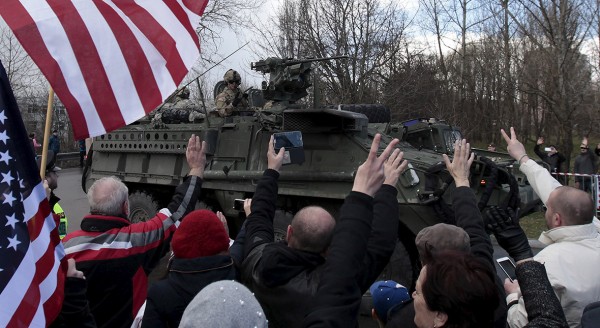 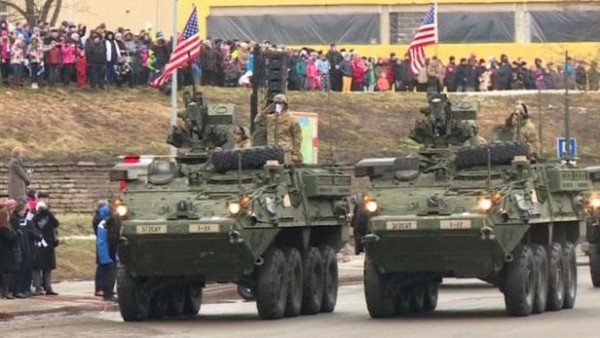 Thousands of Czechs welcomed a convoy of U.S. troops to Prague on Tuesday on their return from exercises in the Baltics, defying expectations pro-Russian groups would protest over the country’s alliance with the west.

The convoy of 118 mostly Stryker armored vehicles has been on a 1,100 mile-path from Estonia to a base in Germany via road instead of the usual rail transport to demonstrate support for NATO nations in central Europe amid the Ukraine conflict.

The convoy raised no fuss in the Baltics or Poland but there was vocal opposition from leftist and nationalist political groups in the Czech Republic as well as activists on social networks that created expectations of a tense passage.

A number of rallies against the convoy of the U.S. Army Europe’s 2nd Cavalry Regiment were announced. But since first U.S. soldiers crossed the border from Poland on Sunday, small groups of protesters were vastly outnumbered by thousands of supporters, many with U.S., NATO, EU and Ukrainian flags.

On Tuesday, the troops mingled with locals around the armored vehicles outside a Prague barracks to the tunes of a rock concert organized by local activists. They were due to leave for the final stretch of the journey to their base in Vilseck, Germany on Wednesday morning.

“I am glad that the Americans will see our support … and that we rely on them that they will not give us up to a Russian aggression,” said Martin Fulin outside the barracks on Tuesday afternoon. Czech news website www.idnes.cz put attendance at that event at 15,000-20,000.

“I was told that there would be some protesters but when we came in that was not what we saw. There were dozens, hundreds or thousands of people present to welcome us there … we could not stop waving,” said Douglas Hardman, a specialist driver with the U.S. unit.

“Massive (pro-Russian) propaganda on social networks and elsewhere produced something opposite than intended,” news agency CTK quoted Stropnicky as saying.

The Czech Republic has been softer in its approach to Russia than the Baltic states or Poland but has fully backed European sanctions against Russia and more intensive NATO exercises in eastern Europe.