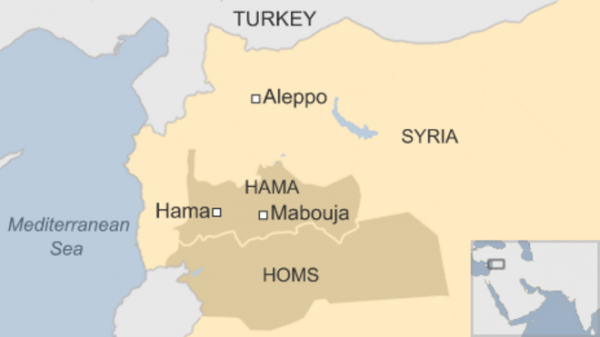 Islamic State militants have killed at least 30 people, including children and women, in a government-held village in central Syria, a monitoring group says.

Some of the victims in Mabouja were burned to death or beheaded, the Syrian Observatory for Human Rights reported.

Mabouja’s population include members of the minority Alawite and Ismaili Muslim sects, which IS considers heretical.

In recent weeks, the jihadist group has mounted numerous attacks in government-held areas in the central provinces of Homs and Hama, where Mabouja is located.

The Syrian Observatory, a UK-based group that uses a network of contacts to monitor the four-year-old conflict in the country, said on Tuesday that IS militants had killed Alawite, Ismaili and Sunni residents of Mabouja by “burning, beheading, and firing on them”.

A Syrian military source told the Reuters news agency that the jihadists had massacred civilians there, but did not have a number for the dead.

“Daesh tried to attack the village, and this attack was repelled, and a large number of Daesh terrorists were killed. And now the Syrian army is imposing its control over the village,” the source said, using a pejorative term for IS based on the acronym of a previous name in Arabic.

“Daesh is making a lot of attempts [to advance] east of Hama. It is trying a lot in that area, particularly after its loss in Shaar [gas] field,” he added.

Sana meanwhile reported that soldiers, militiamen and locals had “confronted an assault” launched by terrorist groups against Mabouja”.

At least eight people were killed and 18 were injured, it said, adding that the assailants also suffered “heavy losses”.

Websites affiliated with IS claimed the village had been “liberated” and that dozens of people had been killed or captured.

Mabouja, about 60km (40 miles) east of Hama, lies near a vital road that serves as the government’s only link between Homs province, to the south, and the northern province of Aleppo.

IS militants have attempted several times to gain control over the road, and killed 83 soldiers in an attack in the region in late March.