Arab summit: Yemen airstrikes to go on until rebels surrender 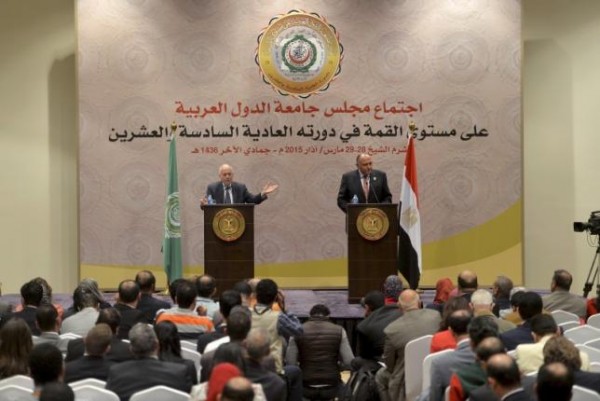 Egypt’s Foreign Minister Sameh Shoukry (R) and Secretary General of the Arab League Nabil Arabi answer questions from journalists during a news conference after the Council of the League of Arab States at the summit level meeting in Sharm El-Sheikh March 26, 2015. REUTERS/Mohamed El-Shahed/Pool
Share:
Saudi-led airstrikes in Yemen will continue until Shiite rebels there “withdraw and surrender their weapons,” a summit of Arab leaders decided Sunday, as they also agreed in principle to forming a joint military force.

The decision by the Arab League puts it on a path to more aggressively challenge Shiite power Iran, which is backing the Yemeni rebels, known as Houthis.

A Saudi-led coalition began bombing Yemen on Thursday, saying it was targeting the Houthis and their allies, which include forces loyal to Yemen’s former leader, Ali Abdullah Saleh. Current and former Yemeni military officials have said the campaign could pave the way for a possible ground invasion.

“Yemen was on the brink of the abyss, requiring effective Arab and international moves after all means of reaching a peaceful resolution have been exhausted to end the Houthi coup and restore legitimacy,” Elaraby said.

The Houthis swept down from their northern strongholds last year and captured the capital Sanaa in September. Embattled President Abed Rabbo Mansour Hadi, a close U.S. ally against a powerful local al-Qaida affiliate, fled first to the southern city of Aden and left the country last week.

Speaking at the summit Saturday, Hadi directly accused Iran of being behind the Houthi offensive, raising the specter of a regional conflict. Iran and the Houthis deny that Tehran arms the rebel movement, though the Islamic Republic has provided humanitarian and other aid.

Asked at a news conference to explain vague references to “foreign powers” being behind conflicts in different Arab nations, Elaraby said: “I will answer this question indirectly. There is meddling by some neighbors, Israel on one side, Turkey and Iranian interference in several countries.”

Speaking after Elaraby, Egyptian President Abdel-Fattah el-Sissi said leaders also agreed in principle to creating a joint Arab military force. He said a high-level panel will work under the supervision of Arab chiefs of staff to work out the structure and mechanism of the force.

Elaraby said the chiefs of staff would meet within a month and have three more months to decide on the structure, budget and mechanism of the force before they present their proposals to a meeting of the Arab League’s Joint Defense Council.

“It is an important resolution given all the unprecedented unrest and threats endured by the Arab world,” Elaraby said.

A summit resolution said the force would be deployed at the request of any Arab nation facing a national security threat and that it would also be used to combat terrorist groups.

“There is a political will to create this force and not to leave its creation without a firm time frame,” Egyptian Foreign Minister Sameh Shukri told a news conference.

Egyptian military and security officials have said the proposed force would consist of up to 40,000 elite troops and be headquartered in either Cairo or Riyadh, the Saudi capital. The force would be backed by jet fighters, warships and light armor.

However, it is unlikely that all 22 member nations of the often-fractious Arab League will join the proposed force. Creation of such a force has been a longtime goal that has eluded Arab nations in the 65 years since they signed a rarely used joint defense agreement.

Iraq, whose Shiite government is closely allied with non-Arab and Shiite Iran, has said more time is needed to discuss the proposed force.

The strikes also continued to target Scud missiles in Yemen, leaving most of their launching pads “devastated,” according to remarks carried Saturday by the state-run Saudi Press Agency. However, he warned that the rebels could have more missiles. His account could not be immediately corroborated.

Yassin said military experts will decide when and if a ground operation is needed.

“This is a comprehensive, a package operation and (ground operations) will depend on the calculations of the military,” he told reporters. Yassin said political dialogue will only happen after the Houthis surrender the weapons they seized from the state.

Pakistan says some 3,000 of its citizens live in Yemen. Indian Foreign Minister Sushma Swaraj also tweeted Sunday: “We are doing everything to evacuate our people from Yemen at the earliest by all routes — land, sea and air.”