The Shia crescendo: Shia militias are proliferating in the Middle East 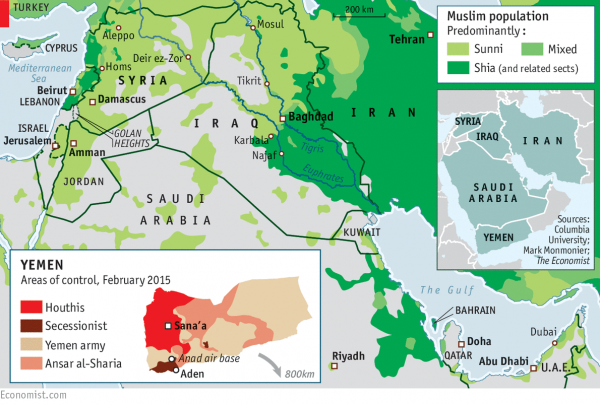 LITTLE more than a decade ago King Abdullah II of Jordan sounded a warning that America’s toppling of Saddam Hussein in Iraq would lead to the emergence of an Iranian-influenced “Shia crescent”—code for Iranian expansion—from Lebanon to Saudi Arabia. His words were dismissed as alarmist. Now, though, that vision might be coming about. As Arab states have broken up, the void has been filled not only by the Sunni jihadists of Islamic State (IS) but also by the makings of a transnational Shia force backed by Iran.

Iran’s allies are propping up Bashar Assad in Syria, halting the advance of IS in Iraq and spreading Iranian influence in Yemen. More important is that once-disparate armed groups are now communicating and fighting side-by-side, giving the impression of a cross-border Shia-flavoured movement.

The most visible signs of emerging Shia power in the Arab world are in Iraq, where an assortment of Shia militias is leading the battle against IS. The main fighting is now taking place in the Sunni heartland in Tikrit, the tribal centre of the former dictator, Saddam Hussein (see map). Hizbullah, the strongest militia in Lebanon and the country’s dominant political force, gained many admirers as the most effective enemy of Israel. But it has moved large numbers of men into neighbouring Syria, to push back Sunnis seeking to topple the regime of Bashar Assad. Some have deployed on the Golan Heights, extending the front against Israel. Hizbullah is also reaching into Iraq, where it has provided explosives experts to help train and advise local Shia militiamen.
In Iraq the fighting is being co-ordinated mainly by Iran, notably by Qassem Suleimani, the chief of Iran’s elite al-Quds branch of the Revolutionary Guard. In Syria Iranians have helped train the paramilitary National Defence Force (NDF), which musters some 100,000 fighters from various sects. They also helped create Shia militias made up of foreign fighters and joint command centres in Iraq and Syria. The links between militias are fluid, with members moving from one to another. The Abo Fadl Al-Abbas militia in Syria, for instance, is headed by Aws al-Khafaji, an Iraqi Shia who crossed into Syria after American troops toppled Saddam.

Many Shia militias claim simply to be defending Shia holy sites. In his office in the Baghdad district of Karrada, Mr Khafaji claims his men in Syria are not fighting for Mr Assad. But the militias’ role goes far beyond the shrines. Hizbullah people make no bones about controlling southern Syria, on the Israeli border. They hint that the land will not be given back to Mr Assad. A Hizbullah commander says that in Syria Hizbullah calls the shots. “Each country is a separate operation, but the goal is one,” says a commander of a militia brigade in Syria. Mr Khafaji hopes eventually for “a Guards of the Shia Revolution, one force across the whole region.”

That may be fanciful. Hizbullah fighters are contemptuous of their Shia comrades elsewhere. “Hizbullah follows the Koran; our men have a role, tactics and a plan,” says the brigade commander. He calls some Iraqi militias “extremists” and criticises their brutality.

Distrust between Shia militias and some of their allies is rife, partly because of sectarian differences. Hizbullah says that, in some cases, Mr Assad’s Sunni pilots have bombed the positions of their Shia allies. Western governments have generally viewed Shia militias as less of a worry than their Sunni counterparts, though they are often as bloody. One reason is that they do not yet target Westerners. Nonetheless, Shia militias are exacerbating violence across the region. Though Iran does also back some non-Shia or mixed groups, including the Iraqi Kurds, Palestine’s Hamas and the NDF, its actions are generally becoming more sectarian.

The ubiquity of Iranian proxies across the Middle East places America in an awkward position. In Iraq, its air strikes are supporting the Shia militias fighting in Tikrit. In Yemen, though, America is offering logistical and intelligence support to Saudi-led forces against Shia Houthis.

Iran and its proxies risk spreading themselves too thin. Sunnis outnumber Shias by nine to one. Disgruntlement is rising, and not just among Sunnis. On March 13th Ayatollah Ali al-Sistani, Iraq’s leading Shia cleric, warned Iran not to forget that Iraq is an independent state.