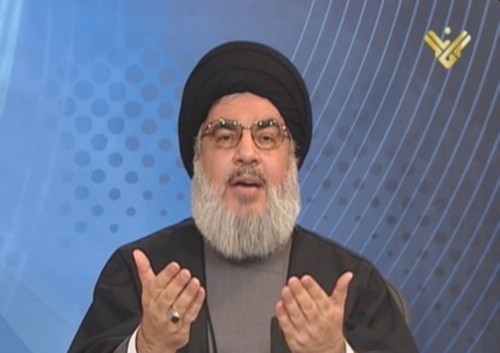 Hezbollah chief Hassan Nasrallah denounced Friday night the Saudi Arabian-led airstrikes in Yemen against the Houthi rebels , accusing Riyadh of abandoning Palestinian cause and failing to take action against Israel over the decades-long conflict.

“If the war was against Israel we would have been partners in the war but not if its against an Arab country,” Nasrallah said during a televised speechfrom undisclosed location via video link a day after Saudi Arabia along with its Arabian Gulf allies launched a surprise military operation against the Iranian backed Shiite Houthi rebels in Yemen.

Nasrallah rejected claims that Iran posed a threat to the Gulf.

He dismissed arguments that the coalition was reclaiming the legitimacy of Yemen’s President Abed Rabbou Mansour Hadi and protecting the Yemeni people, saying that these arguments should be used instead to justify action in Palestine.

He also rejected the claim that Iran was threatening to intervene and dominate the region. “They consider that we should reclaim the land from Iran, and this is the biggest lie,” he said.

“Where is the evidence that Yemen is occupied by Iran,” saying that claims of Iranian bases and armies in Yemen is a lie.

Even claims that Iran is controlling Yemen through political influence is a lie, he said

There is a problem in Saudi Arabia’s mentality in that it doesn’t respect the will of free peoples. They regard everyone as followers and they can’t have an independent will, Nasrallah added.

“This mentality leads to wrong policies… and accumulating failures.”

Accused Saudi Arabia of funding the Islamic State
“Your Bandar (Prince Bandar bin Sultan) is the one who financed Daesh ( Islamic State ) . Nasrallah said
“The Saudi intelligence was behind sending the suicide bombers to Iraq and your latest crime against Iraq was Daesh, which you and your allies sent to topple Bashar Assad and al-Maliki’s regime.” He added

He expressed hopes that “this new political division in the Gulf” doesn’t lead to negative repercussions in Lebanon, especially with regards to the Lebanese government.

The ongoing dialogue between the Future Movement and Hezbollah will remain on track despite sharp differences over the conflict in Yemen, since it served national interests and seeks to decrease sectarian tensions, he stressed.

He said that some in the Future Movement have opposed dialogue since the start and continue to undermine talks through negative positions and statements.

He called on the “resistance” to exercise “patience” and not respond to accusations by the Future Movement since they serve to increase sectarian tensions, saying Hezbollah doesn’t want to assist them in achieving this goal.

Commenting on the Special Tribunal for Lebanon trial of Hezbollah members accused of being behind the murder of former PM Rafik Hariri Nasrallah said that he isn’t concerned with developments since the party doesn’t recognize the legitimacy of the tribunal.

“We will not comment on anything said in the court… since our opposition to the court is clear,” he said, after former Prime Minister Fouad Siniora earlier this week accused Hezbollah of plotting several assassination attempts against Hariri.

Nasrallah also dismissed accusations that Iran was blocking the election of a president that doesn’t express support to Tehran.

“Those responsible for disruption… is Saudi Arabia,” he said.

The problem in Lebanon, is Saudi Arabia has vetoed the election of FPM chief Michel Aoun, “so why are you blaming Iran?.”