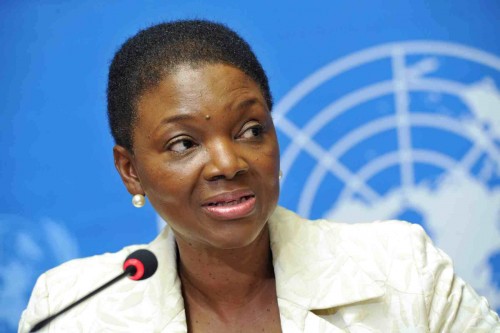 The Syrian government has only allowed the United Nations to deliver aid to three of the 33 sites it has requested access to this year, aid chief Valerie Amos said on Thursday as she urged the U.N. Security Council to take “concrete steps.”

“I ask this council to make it clear to the government of Syria that these convoys must be allowed to proceed and their security forces should allow the free passage of all supplies to people in need,” Amos told the 15-member council.

“Council members may wish to consider the concrete steps they would like to take,” said Amos, adding that next month she would make proposals to the council on what they could do.

The Security Council has been deadlocked on how to try and end the Syrian conflict.Russia, an ally of Syria backed by China, has vetoed several resolutions on threatening any action against Syrian President Bashar al-Assad’s government.

The number of people in besieged areas – where they cannot leave and aid cannot be delivered regularly – had more than doubled to an estimated 440,000 from 212,000, she said, adding that more than 40 percent are besieged by the government.

“Time is running out, more people will die,” Amos said.

U.N. Secretary-General Ban Ki-moon said on Monday that the people of Syria feel “increasingly abandoned by the world.” [ID:nL2N0WQ032]

The United Nations says more than 220,000 people have been killed since Syrian troops cracked down on a pro-democracy movement in 2011, sparking an armed uprising. Some four million Syrians have fled the country and an estimated 7.6 million are internally displaced.

The United Nations is seeking $8.4 billion to meet the humanitarian needs of the Syrian conflict in 2015. A pledging conference will be held in Kuwait on March 31.

Amos said that the life expectancy of a Syrian is now estimated to 20 years less than when the conflict started and nearly two-thirds of some 22 million Syrians are now living in extreme poverty.

“The inability of this council and countries with influence over the different parties at war inSyria, to agree on the elements for a political solution … means the humanitarian consequences will continue to be dire for millions,” Amos said.