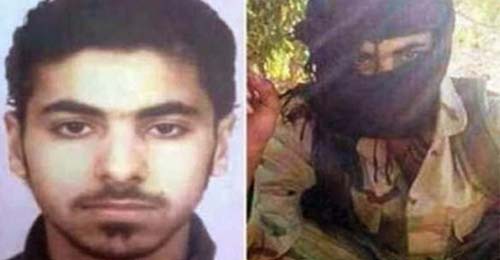 Lebanon’s army said on Tuesday that it had captured two militants, one of whom beheaded a Lebanese soldier who was held by hardline Islamist gunmen along with around two dozen servicemen still in captivity.

A statement from the army said that Omar Mikati and Bilal Mikati were captured on Tuesday morning and are being held on charges of belonging to a terrorist organization and that one was suspected of killing a soldier.

A Lebanese security source said both men are Lebanese.

Spillover from the Syrian conflict has repeatedly jolted neighboring Lebanon.
Militants affiliated to the al Qaeda-linked Nusra Front and Islamic State are demanding the release of Islamists held by the Lebanese authorities in exchange for the captured members of the security forces.

Four soldiers have been killed by the militants since August.

Islamic State has declared a caliphate and seized wide areas of Iraq and Syria, Lebanon’s neighbor to the east.

The Lebanese security forces have cracked down on the group’s sympathizers and the intelligence services have increased vigilance on the borders with Syria.

Wealth of information
The two suspects Omar Mikati 24, and his cousin Bilal Mikati, 23 who were described as highly dangerous and who were detained on Tuesday at an army checkpoint in the northeastern border town of Arsal, could reveal important information during investigations that could lead to the busting of terror networks and dormant cells in Lebanon and the arrest of their accomplices, according to the Lebanese As Safir newspaper published on Wednesday

Two fake Syrian IDs were seized in the possession of the two, who were directly moved to the intelligence branch headquarters in Yarze.

As Safir said that a Syrian national was immediately arrested after the two Mikatis began testifying to investigators.

The newspaper said that the two militants, in cooperation with Fayez Othman, who has been detained recently, and others had formed an armed group and were charged with several dangerous offenses.

In October, State Commissioner to the Military Court Judge Saqr Saqr charged Ahmed Salim Mikati, the father of Omar and 14 others with “belonging to a terrorist group with the aim of carrying out terror acts.”

The charges also included “the formation of armed groups, recruiting individuals, training on the use of arms and explosives, and plotting to occupy the Dinniyeh region villages of Asoun, Bakhoun, Bqaa Safrine and Sir al-Dinniyeh with the aim of creating an IS emirate.”

According to al-Joumhouria newspaper the two men pledged allegiance to the IS a year ago.

A high-ranking military official, who refused to be identified, said in comments to al-Joumhouria newspaper that the “unique operation carried out by the army (on Tuesday) confirms its readiness,” stressing that the hefty catch will lead to clamping down on terror cells.

Omar and Bilal had confessed to slaughtering three people, including the beheading of army sergeant Ali al-Sayyed, who was taken captive after Islamist gunmen overran Arsal.

Al-Akhbar reported that Bilal, who is also known as the Lebanese Abou Omar and Abou Omar al-Trabulsi, was the one who beheaded al-Sayyed, adding that he sent pictures via WhatsApp to his friend in the north to boast about it.

Jihadi sources confirmed to the daily the matter, pointing out that the two men decided to leave al-Qalamoun and head back to Lebanon, fearing an assassination bid against them after division provoked liquidation among the members of IS in the area.

The family of sergeant al-Sayyed expressed relief in comments to As Safir newspaper over the arrest of the two Miqatis, demanding their public execution.

The daily said that the operation compelled the army to boost its measures to avert any possible retaliation by ISIL on the arrest of the two men.