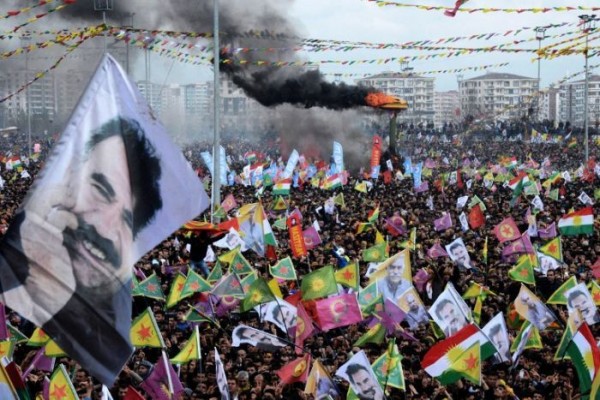 Kurds in Turkey wave banners of PKK leader Abdullah Ocalan as they gather to celebrate Newroz, the Kurdish New Year.
Share:
The imprisoned leader of Turkey’s Kurdish rebel group the PKK, Abdullah Ocalan, has called for Kurds to end a decades-long armed struggle against the Turkish state that has claimed tens of thousands of lives.

In an eagerly-anticipated message for the traditional Kurdish New Year, Ocalan called for a congress to end the fighting, but stopped short of setting out a clear road map for disarmament of the Kurdistan Workers Party (PKK) rebels.

In the message read out by a pro-Kurdish lawmaker to hundreds of thousands of supporters in the south-eastern city of Diyarbakir, Ocalan said that the armed struggle had been “painful” and could no longer be maintained.

“A congress should be organised to bring an end to the 40-year struggle against the Turkish Republic,” Ocalan said in the message read out by Sirri Sureyya Onder of the People’s Democratic Party (HDP).

Ocalan is serving a life sentence on the prison island of Imrali in the Sea of Marmara following his sensational arrest by Turkish agents in Kenya in 1999.

He said the congress – which would likely involve all the Kurdish political forces in Turkey – would decide “a social and political strategy which will determine our history”.

Ocalan said that such a congress would usher in a “new era” in relations between Turkey and the Kurds.

The Turkish government welcomed the message, with deputy prime minister Bulent Arinc describing the statement as “positive in every way”.

The ruling Justice and Development Party (AKP) co-founded by president Recep Tayyip Erdogan has worked over recent years to find a solution to end the violence, granting modest reforms to the Kurdish minority.

Prime minister Ahmet Davutoglu vowed that the government “would do what it takes” for success in the peace process, saying Turkey was entering a new period of unity.

“Let’s leave the anger aside and from now just focus on talks,” he told supporters in a speech in Istanbul.

HDP deputy chairperson reads Abdullah Ocalan message
PHOTO: Peoples’ Democratic Party (HDP) deputy chairperson Pervin Buldan reads a message from jailed PKK leader Abdullah Ocalan calling for peace. (AFP: Ilyas Akengin)
“Let’s bury in the ground for ever the culture of hatred, the violence and the weapons. Let’s bury the pain of the mother of a martyr in the ground.”

However the route to a final peace deal remains thorny, with Turkey preparing for legislative elections on June 7 and still shaken by the deaths of dozens in clashes during pro-Kurdish protests in October 2014.