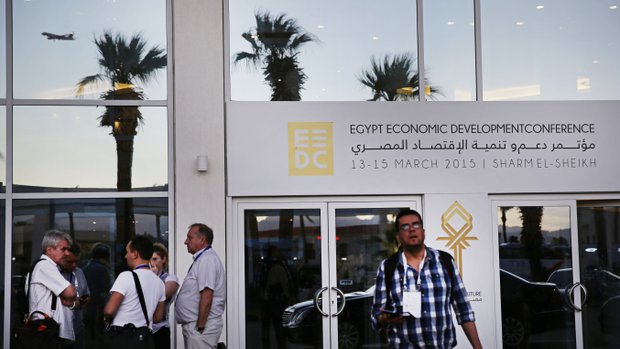 Egypt’s Gulf Arab allies promised it $12 billion in new investment and aid on Friday, as President Abdel-Fattah el-Sissi opened an international conference to promote an ambitious recovery plan for his country’s ailing economy.

Speaking to an assembly of businessmen, royals, heads of state and international officials, el-Sissi depicted Egypt as vital to Mideast stability and a bulwark against Islamic militancy, making his case that the country needs world backing to rebuild an economy devastated by four years of turmoil.

He said his recovery plan aims to achieve at least six percent annual growth in GDP within the next five years, up from about 2 percent currently, and reduce inflation to about 10 percent. He also promised fair taxation and lower inflation.

The Emir of Kuwait, the crown prince of Saudi Arabia and the ruler of the prosperous emirate of Dubai attended the opening the session in the Red Sea resort town of Sharm el-Sheikh. Also on hand were the kings of Bahrain and Jordan, the Palestinian President as well as U.S. Secretary of State John Kerry.

Kuwait’s Emir Sheikh Sabah Al Ahmad Al Sabah, who addressed the gathering after el-Sissi, announced that his oil-rich nation would invest $4 billion in Egypt. He gave no details. The crown prince of Saudi Arabia, Prince Muqrin, announced another $4 billion in an aid package.

The prime minister of the United Arab Emirates and ruler of Dubai, Sheikh Mohammed bin Rashid Al Maktoum, announced $4 billion in aid, including a $2 billion deposit in the central bank.

The pledges continue a flow of largesse that has come from the three Gulf Arab nations ever since Egypt’s military, then led by el-Sissi, ousted the elected president, Islamist Mohammed Morsi, in July 2013. More than 20 billion dollars from the three nations since then have kept Egypt’s economy afloat.

El-Sissi, who was elected last year in a landslide victory, used the gathering to emphasize what he called Egypt’s uncompromising stand against Islamic militancy and terrorism as well its non-aggressive foreign policy and respect for its neighbor.

“Egypt has and will always be the first line of defense against the dangers faced by the region,” said el-Sissi, wearing a dark suit and a purple tie. He was repeatedly interrupted with applause.

“You will find Egypt safe and secure,” el-Sissi told the delegates, alluding to his government’s battling against a burgeoning Islamic insurgency which has lately shifted focus to a campaign of small bombings targeting local and foreign business interests in Cairo and other cities.

He concluded his 26-minute speech with what has by now become his trademark slogan of “long live Egypt!”
Update
Lebanon knows the meaning of economic  hardship

Lebanese PM Tammam Salam delivered a speech at the conference in which he said that Lebanon more than any other country knows the meaning of an acute economic hardship.

He added : ” But we have come with open hands to declare our faith in Egypt’s role, army, people and all active forces.”

Praising the Egyptian president he said:

“I have to salute the president of the Arab Republic of Egypt, Abdel Fattah al-Sisi, who is wisely and competently assuming a tough mission during one of the most difficult periods in Egypt and the entire Arab world.”

Praising the Saudi contribution to Egypt and Lebanon he said :

” We are fighting a battle against terrorism and we have succeeded in it with the help of the Kingdom of Saudi Arabia. We are monitoring what Egypt is witnessing at the hands of the forces of extremism and darkness.” This is a possible reference to the $4 billion contribution by the Saudis to the Lebanese army .

He concluded his speech by saying:

” Together with Egypt we are capable to foil strife, defeat darkness and emerge victorious in the struggle of wills. We can pave the way for our people towards a bright and promising future.”
My Way/AP/YL