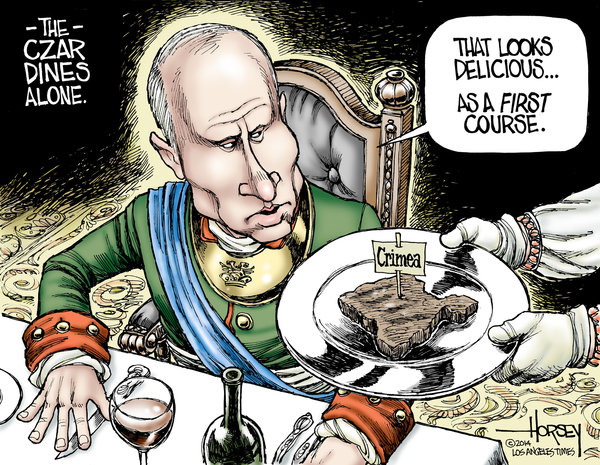 Russian President Vladimir Putin has said he ordered officials to start work on taking control of Crimea weeks before a referendum which, the Kremlin has asserted until now, prompted the region’s annexation from Ukraine.

Russian state television channel Rossiya-1 aired a brief extract of an interview in which Putin said he had called an emergency meeting in February last year to discuss the overthrow of Ukrainian president Viktor Yanukovich hours earlier.

Yanukovich, a Russian ally, had fled to the eastern Ukrainian city of Donetsk after being forced out by anti-government protests.

“He would have been just annihilated… We got ready to get him out of Donetsk by land, by sea and by air,” Putin said about his meeting in the Kremlin with commanders of special forces and defense ministry officials.

“This was on the night of Feb. 22 through to Feb. 23. We finished around 7 in the morning. And, while saying goodbye, I told all the colleagues: ‘We have to start the work on Crimea’s return into Russia’.”

This account, broadcast on Sunday, appeared to be at odds with previous assertions from Russian officials that the annexation decision was taken only after the referendum on March 16, when Crimeans voted to become part of the Russian Federation.

The virtually bloodless seizure of Crimea – a Black Sea peninsula with an ethnic Russian majority and where Moscow has a naval base – was followed by a pro-Moscow insurgency in the east of Ukraine.

About 6,000 people have been killed in the fighting in eastern Ukraine. A fragile ceasefire, agreed last month in Minsk, has largely held so far.

Western governments have condemned Russia’s intervention in Crimea as illegal, with the European Union and United States imposing sanctions on Moscow.

In the months since, Putin has adjusted his account of what happened. He initially denied Russian troops were providing security for the referendum, but later acknowledged special forces had been deployed.

Russian soldiers who took part have been given state medals with the citation “For returning Crimea”, which give the starting date of the operation as Feb. 20, before Yanukovich was ousted.

Novaya Gazeta, a newspaper often critical of Putin, published details last month of what it said was a document presented to the presidential administration some time between Feb. 4 and Feb. 12 last year. It said the document described a plan to annex Crimea and easternUkraine. The Kremlin called the newspaper’s report nonsense.