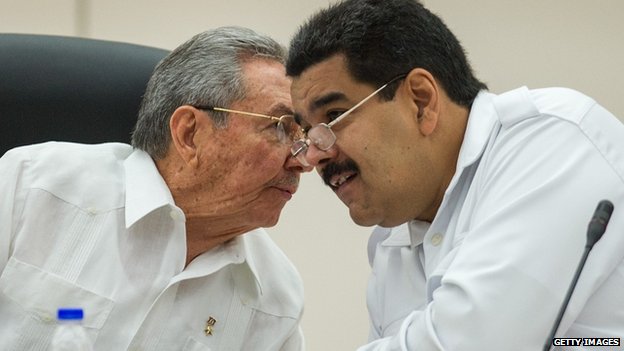 The United States on Monday declared Venezuela a national security threat and ordered sanctions against seven officials in the worst diplomatic dispute with the oil-rich country since socialist President Nicolas Maduro took office in 2013.

President Barack Obama issued and signed the executive order, which senior administration officials said did not target the energy sector or Venezuela’s broadereconomy. The move raises tensions between Washington and the OPEC member just as U.S. relations with Cuba, another longtime U.S. foe in Latin America, are set to be normalized.

Declaring a country a national security threat is the first step in starting a sanctions regime. The same process has been followed with countries such as Iran and Syria, U.S. officials said.

The White House said the executive order targeted people whose actions undermined democratic processes or institutions, had committed acts of violence or abuse of human rights, were involved in prohibiting or penalizing freedom of expression, or were government officials involved in public corruption.

“Venezuelan officials past and present who violate the human rights of Venezuelan citizens and engage in acts of public corruption will not be welcome here, and we now have the tools to block their assets and their use of U.S. financial systems,” White House spokesman Josh Earnest said in a statement.

“We are deeply concerned by the Venezuelan government’s efforts to escalate intimidation of its political opponents. Venezuela’s problems cannot be solved by criminalizing dissent,” he added.

The seven individuals named in the order, which included top domestic security and intelligence officials, would have their property and interests in the United States blocked or frozen and would be denied entry into the United States. U.S. persons would also be prohibited from doing business with them.

The White House also called on Venezuela to release all political prisoners, including “dozens of students,” and warned against blaming Washington for its problems.

“We’ve seen many times that the Venezuelan government tries to distract from its own actions by blaming the United States or other members of the international community for events inside Venezuela,” Earnest said in the statement.

“These efforts reflect a lack of seriousness on the part of the Venezuelan government to deal with the grave situation it faces.”

U.S. officials told reporters in a conference call that the executive order did not target the Venezuelan people or economy and stressed that upcoming legislative elections should be held without intimidation of the government’s opponents.

The sanctions effectively confirm Venezuela as the United States’ primary adversary in Latin America, a label that was for decades applied to Communist-run Cuba until Washington and Havana announced a diplomatic breakthrough in December.

Washington said last week it would respond through diplomatic channels to Venezuela’s demand for a cut in the U.S. Embassy’s staff in Caracas after the government called for a plan within 15 days to reduce staff to 17 from 100 at the American facility.

Commercial ties between Venezuela and the United States have, however, been largely unaffected by diplomatic flare-ups, which were common during the 14-year-rule of late socialist leader Hugo Chavez.

The United States is Venezuela’s top trading partner, and Venezuela in 2014 remained the fourth-largest supplier of crude to the United States at an average of 733,000 barrels per day – despite a decade-long effort by Caracas to diversify its oil shipments to China andIndia.

Opposition leader and twice-presidential candidate Henrique Capriles told Reuters the sanctions were a problem for a corrupt elite in the Maduro government, but not ordinary Venezuelans.