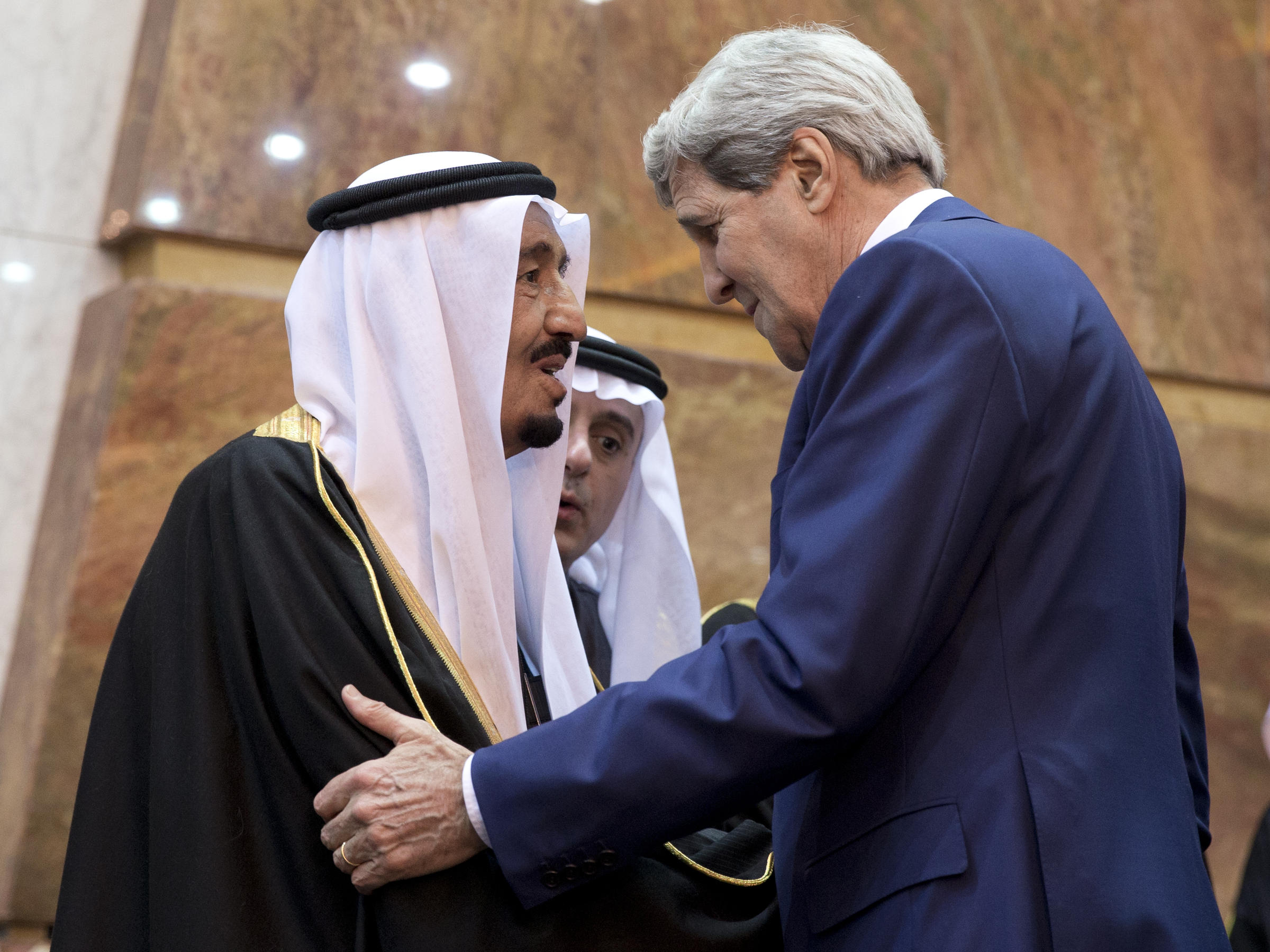 Secretary of State John Kerry shown greeting new Saudi King Salman in Riyadh last January
Share:
U.S. Secretary of State John Kerry flies to Riyadh this week to try to reassure King Salman that any nuclear deal with Iran will be in Saudi interests, despite the kingdom’s fears that it may boost Tehran’s backing for Shi’ite Muslim groups in the region.

Convincing Saudi Arabia to accept any agreed nuclear deal is important to President Barack Obama because he needs Riyadh to work closely with Washington on a host of regional policies and to maintain its role as a moderating influence in oil markets.

While the main critics of the U.S. push for a nuclear deal with Iran are Israel and Congressional Republicans, Sunni Muslim powerhouse Saudi Arabia is also concerned that an accord would allow Iran to devote more cash and energy to Shi’ite proxies in Syria, Iraq, Lebanon and Yemen, escalating conflicts.

“The Saudis fear Obama will give the Iranians a deal whatever the cost because it is important for his legacy and that Iran will get a certain regional status in exchange for an agreement,” said one diplomat in the Gulf.

Kerry met Iranian Foreign Minister Mohammad Javad Zarif in Montreux, Switzerland, on Monday and Tuesday and the two are expected to sit down again on Wednesday as they try to meet a late March deadline to achieve a framework nuclear agreement.

The main purpose is to brief them on the state of the Iran talks and to make the case that a diplomatic solution to the long-festering crisis over Iran’s atomic program will make them more secure rather than less.

Saudi Arabia’s anxiety about an agreement has fueled a flurry of diplomacy in recent days to bolster unity among Sunni states in the Middle East in the face of shared threats including Iran, analysts say.

Washington shares Arab concerns about Iran’s role, particularly in Syria and Yemen and through its ties to Lebanon’s Hezbollah militia, a senior U.S. official said, on condition of anonymity, but added that there was a “very substantial” U.S. military commitment to Gulf allies.

“What we need to do is have the appropriate strategies to counter any provocative and destabilizing behavior … It’s going to depend on what can we do effectively in places like Syria and Yemen,” he said.

A second senior U.S. official told reporters a nuclear deal would not necessarily lead to a closer U.S.-Iran relationship and less influence for Sunni Arab nations such as Saudi Arabia, nor would it diminish U.S. efforts to counter Iranian influence.

“You can’t read into the nuclear negotiation any kind of determination of where the U.S. relationship with Iran may go in the future,” he said. “Regardless of what happens with the nuclear file, we will continue to confront aggressively Iranian expansion in the region, Iranian aggressiveness in the region.”

However, U.S. officials are unwilling to outline what strategies might curb Iran’s regional influence, and the U.S. record in Iraq, Syria and Yemen – where armed Iranian allies have since flourished – has caused Saudi Arabia great anxiety.

The country’s trust in Washington during the Iran talks is also still recovering from the sudden move in late 2013 toward a nuclear deal, when Saudi officials were blindsided by the revelation of months of secret talks between the U.S. and Iran.

“They are very, very nervous about the way we are moving forward,” said a Western diplomat who tracks the issue closely. The diplomat said Riyadh feared a “lose-lose situation” in which Iran either gained an atomic weapon or was freed from sanctions.

Riyadh has long been worried about Iran gaining nuclear weapons capability, something that once led the late King Abdullah to ask Washington to “cut off the head of the snake” by striking Iran, diplomatic cables released by WikiLeaks showed.

But it now sees Iran’s involvement in Arab countries, particularly its backing of Syrian President Bashar al-Assad, its support for Iraqi Shi’ite militias and its ties to the Houthi group that has seized control in northern Yemen, as a more urgent problem.

A senior State Department official told Reuters: “Secretary Kerry will make clear we understand the concerns they have about the region’s security, concerns that we also share.”

Meanwhile, King Salman is working to forge a united front among Sunni states against what Riyadh sees as the dual threat from Iran and Islamic State militants, analysts say.

Over the past week Salman has met the leaders of all Saudi Arabia’s Gulf Arab neighbors, the king of Jordan and the presidents of Egypt and Turkey, the two most populous and militarily powerful Sunni states in the region.

“The understanding is that we will face a more aggressive Iran if they sign an agreement. All the restrictions on it will be lifted and it will be much stronger. This is an issue that needs some sort of unity,” said Mustafa Alani, an Iraqi security analyst with ties to the Saudi Interior Ministry.