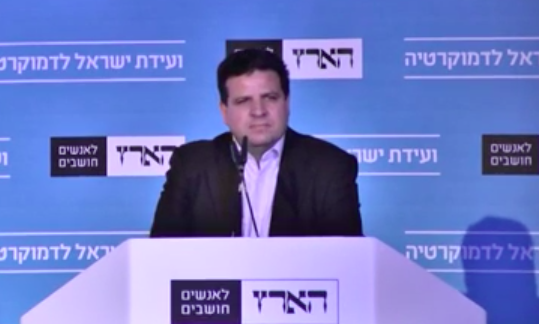 Ayman Odeh, the leader of the Joint List said that Netanyahu’s apology (about the racist remark about the Arabs) was not accepted. .”This is not a real apology,” Odeh said. “He incited against citizens who were exercising their basic right to vote for Knesset.”
Share:

A charismatic Arab politician, who confidently jousts with Jewish rivals on TV and wants to build a broad Arab-Jewish “alliance of the disadvantaged,” has emerged as one of the biggest surprises of Israel’s election campaign.

Odeh’s inclusive leadership style also signals a new confidence among younger Arabs, less conflicted than their parents and grandparents about their place in Israel, analysts say.

Odeh burst onto the national scene last week in a TV debate ahead of March 17 parliament elections. Ultranationalist Foreign Minister Avigdor Lieberman repeatedly tried to provoke Odeh, the only Arab at the table, claiming Arab politicians “represent terror groups” seeking to destroy Israel from within and berating him as a “fifth column.”

Odeh didn’t take the bait. Smiling, he noted that his alliance is running well ahead of Lieberman’s struggling faction, with polls predicting it could emerge as the third largest group in parliament.

Debating in fluent if accented Hebrew, Odeh said he is deeply rooted in the region and casually underscored his ties to the Holy Land by citing from the Old Testament’s Book of Proverbs: “He who digs a pit (for others) will fall into it.”

That was also a dig at Lieberman who had successfully pushed legislation last year to raise the threshold for entry to parliament — a move Arab politicians suspect was meant to keep their small parties out of parliament. It seems to have backfired, instead prompting Odeh’s Arab-Jewish Hadash party and the three Arab parties to band together into something that may be greater than the sum of its parts.

The alliance has galvanized Arab voters, with polls saying turnout could be several percentage points higher than in 2013, when just 56 percent of eligible Arabs voters cast ballots, about 10 points below the national average.

The Joint List, latest polls say, seems set to win 13 seats in the fractured 120-member Knesset, coming in third behind the center-left Zionist Union and the rightist Likud Party of Prime Minister Benjamin Netanyahu. Odeh has said his goal is 15 seats.

Indeed, no Arab party has ever been formally in an Israeli coalition — although they have been critical to propping up center-left governments of the past. This time, with a perhaps bigger bloc in parliament, the Arabs’ tacit backing would be especially crucial for the center-left to be able to unseat Netanyahu.

For now, Odeh hopes the Joint List could lead the parliamentary opposition and that its legislators would be able to demand membership in important committees.

Mainly, Odeh wants to build an “alliance of the disadvantaged” among Arabs and Jews. He said arguments about Israel’s nature — a Jewish state or a state for all its citizens — fail to recognize the more meaningful division, between rich and poor.

“This is a state of the tycoons against all the disadvantaged in the country,” he said.

In the TV debate, he urged Arieh Deri, head of the ultra-Orthodox Jewish Shas Party, to join forces on shared concerns.

Shas supporters, many low-income, are typically hard-line on Palestinian statehood, but Odeh argued that such differences shouldn’t prevent ad hoc alliances. Deri said he is open to the idea.

Such pragmatism appeals to many Arab voters, seemingly more concerned about winning equal rights in Israel than seeing a Palestinian state established next door.

Israel’s Arab citizens, who make up about 20 percent of a population of 8.2 million, are descendants of Palestinians who remained in their homes during the Mideast war over Israel’s 1948 creation, when many others fled or were expelled. They retain ties with Palestinians in the West Bank, Gaza and east Jerusalem, lands Israel captured in 1967, and strongly identify with dreams to set up a Palestinian state in those territories.

But domestic concerns are often more powerful, with Arabs in Israel complaining of long-standing official discrimination.

“We want the Joint List to work on all our problems, to represent our issues in the Knesset,” said Dina Mahameed, a 32-year-old nurse from the town of Umm al-Fahm, citing better job opportunities as one of her priorities.

The Joint List, established in January, has cobbled together a shared platform, despite deep differences between socialists, Palestinian nationalists and traditional Islamists on issues such as the role of women and religion in society.

Odeh’s Hadash is a veteran socialist party in Israel that emphasizes Arab-Jewish cooperation.

Odeh grew up in a Muslim family but describes himself as someone who has transcended the narrow confines of ethnicity and religion that still loom large in the region. The only Muslim in a Christian school, he proudly notes he got an A in New Testament studies on his high school final exams.

At age 23, he was elected to the municipal council of the Arab-Jewish port city of Haifa. In 2006, he became secretary-general of Hadash.

Meeting with Jewish activists from Hadash this week, he tried to allay concerns that the new alliance would dilute the party’s principles, such as gender equality.

Avraham Burg, a former parliament speaker from the center-left Labor Party who endorsed Hadash this year, said he was initially skeptical about the Joint List but is now keeping an open mind, based on assurances from Odeh.

Danny Danon, a senior member of Netanyahu’s Likud Party, is waiting to see what policies the Joint List pursues.

He noted that one of the Joint List’s leading members is Haneen Zoabi who has expressed understanding for Palestinian militants who kidnapped and killed three Israeli teens last year, comments that outraged many Israelis. If Odeh follows “the path of Zoabi, you will find us fighting his platform,” Danon said.

Burg said the Joint List can transform politics, provided it doesn’t fall apart after the elections.

“We will witness a new landscape for the entire democratic camp in Israel in which Israeli Arabs are no longer excluded as pariahs,” he predicted.