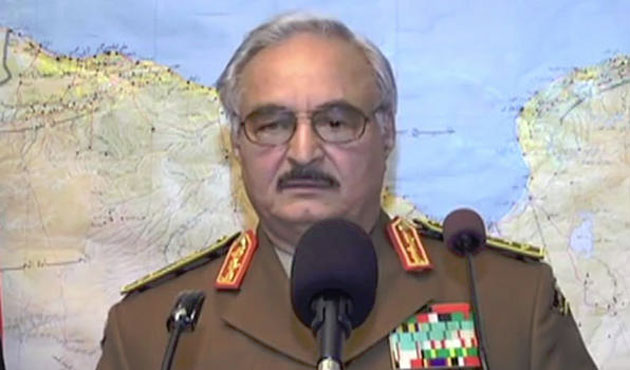 Khalifa Haftar, one of the most divisive figures in post-revolutionary Libya, was appointed army commander for the country’s internationally recognized government on Monday in a move that could complicate U.N. talks to end the conflict.

Four years after Muammar Gaddafi’s demise, Libya is mired in a conflict pitting the recognized government against a rival administration set up by an armed faction known asLibya Dawn that seized the capital Tripoli last summer.

Responding to Haftar’s appointment, the Tripoli government denounced the former Gaddafi ally as a “war criminal” and said his promotion would further exacerbate a power struggle that threatens to tear the country apart.

He said Haftar had been promoted to lieutenant general, adding he would be sworn in on Tuesday or Wednesday.

Haftar originally helped Gaddafi come to power but fell out with him in the 1980s and then joined the 2011 revolution against him. However the Tripoli-based government views Haftar’s reemergence as a sign that the old guard is gaining strength.

Last year, Haftar began a self-declared war against Islamist militants in Benghazi, Libya’s second biggest city. He gained support from some Libyans tired of their country’s chaos, but also drew criticism over air strikes and attacks on civilian airports and sea ports.

“Khalifa Haftar for us is a war criminal and therefore, of course, this measure will add to the escalation and complicate things,” Omar Hmaidan, spokesman for the former parliament which was reinstated by Tripoli’s new rulers.

Haftar has merged his irregular forces with army troops in the east to fight disparate Islamist groups. But he has also targeted forces loyal to the Libya Dawn armed faction.

The United Nations is trying to organize peace talks between the rival administrations to defuse the conflict in the oil-producing North African nation. Representatives from both factions had been meeting for talks, but the House of Representatives recently suspended its participation.