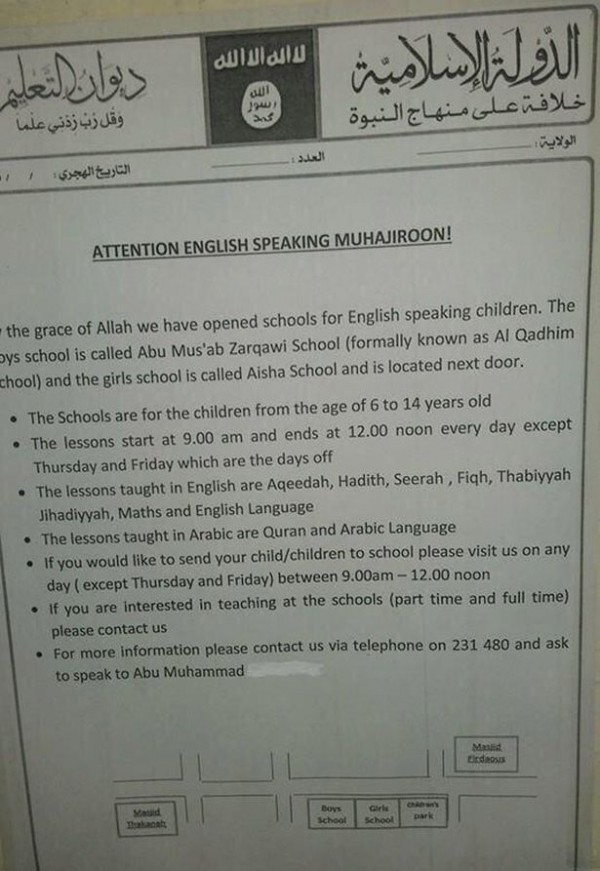 The Islamic State of Iraq and Syria (ISIS) has reportedly opened two English-language schools in Syria’s Raqqa, the capital of its so-called caliphate, in an apparent attempt to cater to the families of foreign fighters, the Independent newspaper reported on Monday.

The daily referred to activists in Raqqa who had drawn attention to a flier for the “attention [of] English speaking muhajiroon.”

The ISIS- emblazoned flier – which includes contact details and lesson times for two separate facilities, one for boys, the other girls – claims that “by the grace of Allah we have opened schools for English speaking children.”

One activist with the group “Raqqa is Being Slaughtered Silently” posted an image of the flier online, the daily said.

Abu Ibrahim Raqqawi said the flier offered “teaching to foreign fighters’ children” in a range of subjects including religious studies according to ISIS’ interpretation of Islamic law, English, maths, and “jihadiyyah.”

Raqqawi said schools in Raqqa only reopened this month. “[Parents] are so worried that their children will be brainwashed that they mostly keep them at home,” he was also quoted as saying.

In an account to  The Observer, Raqqawi said teachers, before returning to schools, were made to “denounce themselves for using ‘infidel’ textbooks in the past,” highlighting the troubling state of education in Raqqa.

In late 2014, a monitoring group was informed that ISIS militants had begun to implement their own “Islamic curriculum” for students living in Raqqa.