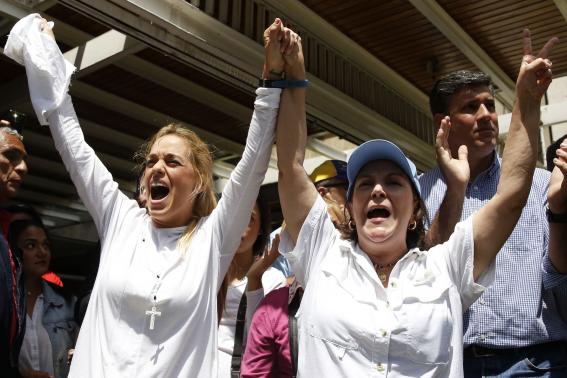 Venezuela’s president is panicking over falling popularity and has revealed his authoritarian face by arresting Caracas’s mayor, the opposition politician’s wife said.

Antonio Ledezma, 59, was seized by intelligence agents in his office on Thursday and charged the next day for “conspiring” against President Nicolas Maduro’s socialist government which has been alleging a U.S.-backed coup plot.

In an interview on Sunday, his wife Mitzy, 64, said it was in fact Maduro displaying his dictatorial tendencies by locking up the veteran politician ahead of important parliamentary elections due for later in 2015.

“Maduro is terrorized, panicked by the opposition. He knows that every day there are more opponents,” Mitzy Ledezma said.

The OPEC country’s recession, shortages of basic goods from toilet paper to flour, and near-70 percent annual inflation have hurt Maduro, elected in 2013 to replace the late Hugo Chavez.

Poor Venezuelans, the traditional base of support for “Chavismo”, are suffering the brunt of the hardships and are increasingly souring on the former bus driver and union leader.

The president’s popularity slipped to 22 percent, the lowest of his nearly two-year rule, local pollster Datanalisis said last month. But a perennially fragmented opposition has so far struggled to capitalize on the exasperation.

Mitzy Ledezma said her husband’s arrest was a game-changer that will galvanize their bloc.

“Maduro’s mask of a supposed democrat has fallen off in the eyes of the world,” she said by telephone.

“He’s committed a major mistake. There will be a before and after… The opposition is more united than ever.” 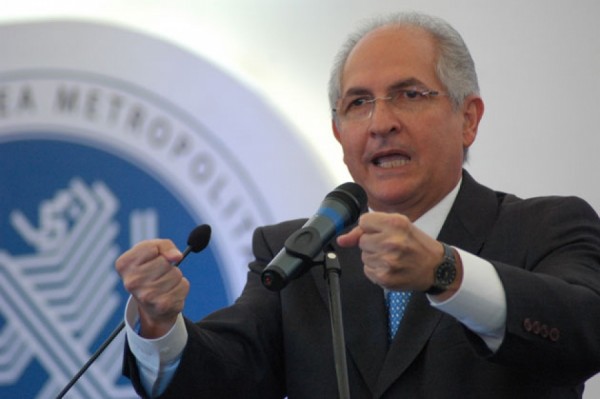 Ledezma’s arrest has already prompted isolated demonstrations in Caracas and violence in the western city of San Cristobal, but has not triggered major unrest in the deeply polarized country of 30 million.

Ledezma is the highest-profile Maduro opponent arrested after Leopoldo Lopez, detained for his role in last year’s anti-Maduro protests that brought months of violence and 43 deaths.

Officials say Ledezma, mocked as “The Vampire” by Maduro supporters, has ties with violent hardliners and recently supported dissident military officers plotting to topple the president via air strikes.

State media has launched a campaign to discredit him.

One government-broadcast video shows recently detained student radical Lorent Saleh praising Ledezma as “an old fox … the politician who has most supported the resistance.”

State television channel VTV has also been blasting Ledezma for supporting a 2002 coup against Chavez, and accusing him of corruption and justifying a 1992 shooting of inmates during his time as Caracas governor.

“It’s a lie,” said Mitzy Ledezma of the charges against her husband of 26 years. “The biggest sin he could commit is being a democrat.”

The mayor’s wife said she was barred from visiting her husband this weekend at the Ramo Verde military prison, where Lopez is also detained. She spoke to him for 10 minutes on Saturday and hopes to see him on Thursday.

“Ledezma is stronger than ever,” said Mitzy, who used to work in advertising and has two daughters with Ledezma. “He asked that we keep up the struggle.”