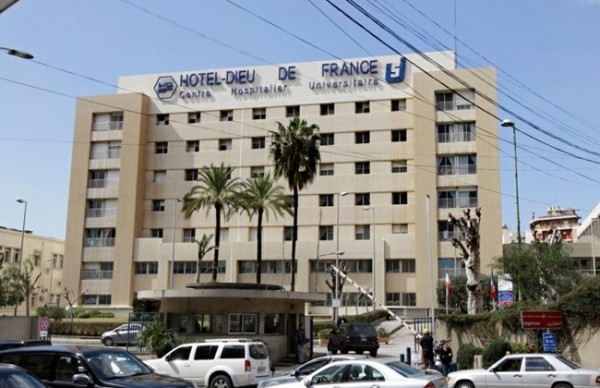 Lebanon Health Minister Wael Abu Faour canceled the government’s contract with Hotel Dieu Hospital one of Lebanon’s most prestigious hospitals after for violating its agreement with the ministry.

The decision came after the Hospital refused to admit a patient with physical disability.

“A young woman named Aya, who is a poor orphan, had been trying to enter the hospital for surgery since last week,” and aide of Abu Faour was quoted as saying . “Hotel Dieu rejected the ministry’s calls to admit the patient, and its contract was thus terminated.”

“What is the use of the contract when the hospital does not respect it?” He said

The patient was neither covered by the National Social Security Fund nor a private insurance company, meaning she had the right to health ministry medical coverage.

As a result of the contract cancellation, Hotel Dieu will no longer be allowed to treat patients covered by the ministry.

Abu Faour warned all hospitals against rejecting patients covered by the ministry.

“The state [is not to be considered a viable] one if it fails to convince a hospital to treat a poor citizen with health coverage from the Health Ministry,” Abu Faour said in a statement issued by his ministry.

“Under any circumstance, we will not allow the humiliation of citizens, or the demeaning of the state, which remains stronger than everybody else.”

The Hotel Dieu de France Hospital in Beirut’s Ashrafieh district said Sunday that its doors were still open to patients with health coverage from Lebanon’s Health Ministry, one day after the latter announced that it had terminated the government’s contract with the facility.

In a statement, Hotel Dieu hospital announced its commitment to treating emergency cases pertaining to patients who are covered by the Health Ministry.

The hospital responded by claiming that it did not refuse to admit the patient who visited the facility earlier this month, but instead delayed the surgery since the patient was not deemed to be in urgent need of the operation.

According to the statement, delaying the procedure was also due to the fact that the operation required a one-month stay in the hospital, which meant that arrangements had to be made in coordination with the physicians’ schedules and the availability of rooms.

The hospital claimed that it had informed the patient’s family that they would be contacted with the date of the surgery when all preparations were finalized.

The hospital called on the Health Ministry to refer its complaints directly to the hospital’s president in an effort to avoid any future misunderstandings.

In response, the Health Ministry also released a statement Sunday, refuting the hospital’s version of events. It added it was not the minister’s duty to file a complaint to any party regarding the incident.

The statement said that patient, Loris Khalil, who was issued a disability card by the Health Ministry, visited the hospital earlier this month after suffering from acute inflammation in her feet to seek the services of Dr. Khalil Kharat, an orthopedic specialist at the hospital.

The patient, who has been suffering from the disability since she fell off the fifth floor of her building in 2013, decided to undergo surgery after consulting with Dr. Gabriel Saliba, another physician in the hospital.

In turn, Saliba had ordered her to complete the necessary paperwork and said that the hospital would contact her when preparations for the procedure were finalized.

However, the hospital did not contact the patient, which prompted the intervention of Health Minister Wael Abu Faour, who tasked a ministerial official with ensuring the hospital’s compliance with treating Khalil.

During talks, the hospital’s president repeatedly refused to carry out the procedure due to the operation’s high cost and the facility’s contract was thus terminated, the ministry statement said.

On Sunday Abu Faour , who is determined to continue with his campaign of stamping out corruption commented to MTV about the cancellation of Hotel Dieu contract
“I practiced my authority and if they don’t like it let them sue me. I don’t owe anyone any clarification or explanation of my decisions and the official ruling will be issued on Monday.”