Kerry: U.S. must understand what drives people to the Islamic State 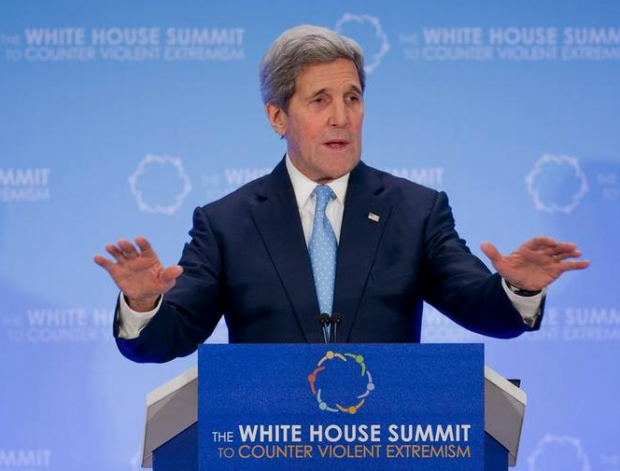 Secretary of State John Kerry said Thursday that the U.S. must understand what drives people to the Islamic State, echoing a similar warning from Glenn Beck this week. AP Photo/Pablo Martinez Monsivais
Share:

Secretary of State John Kerry said Thursday that it’s crucial for the U.S. and its allies to understand what motivates people to join and fight for the Islamic State, just a day after Glenn Beck( an American television and radio host, political commentator, author, television network producer,  filmmaker and entrepreneur) offered very similar advice for countering the terrorist group.

“Why do people make what to many of us would seem to be an utterly wrongheaded choice, and become the kind of terrorist that we’re seeing?” Kerry said Thursday on the last day of the Obama administration’s summit on how to counter violent extremism.

“It’s a question that we need to approach with humility, but also with determination, because you cannot defeat what you don’t understand,” Kerry said.

On Wednesday, Beck stressed that the U.S. should not be looking to enter a sustained war against the Islamic State until “we all understand who we are battling.”

While the two sets of comments show a glimmer of some possible agreement on how to deal with new terrorist threat, Beck also warned that the Obama administration has made many other comments that seem to indicate little understanding of what the U.S. is facing.

“On the left, they never admit that these guys actually believe in something,” Beck said. “But it really does matter. It does matter. I’m glad to see someone do their own homework and finally call it like it is … especially after all the random folks and the talks of the Crusades, and ‘what difference [at this point] does it make?’ ”

The administration has clearly stumbled in its effort to explain its war posture against the Islamic State, while simultaneously explain that it is not seeking a war against all Muslims. All this week, a State Department spokeswoman was defending her comment that seemed to imply that the U.S. can stop the Islamic State by helping its followers find jobs.

On Wednesday, another spokeswoman clarified that fighting the root causes that get people to join the Islamic State is a longer-term effort, and that the U.S. policy for people fighting the U.S. now is, “they’ll be killed.”

Kerry seemed to clarify this even further Thursday morning, by saying the first mission is to stop the violent killings that have been orchestrated by the group.

“There are no grounds of history, religion, ideology, psychology, politics or economic disadvantage, or personal ambition that will ever justify the killing of children, the kidnapping or rape of teenage girls, or the slaughter of unarmed civilians,” he said. “These atrocities cannot be rationalized, they cannot be excused, they must be opposed and they must be stopped.”

But Kerry also gave a nod to the longer-term work of stopping the group from picking up more recruits.