Too much water may not be good for you 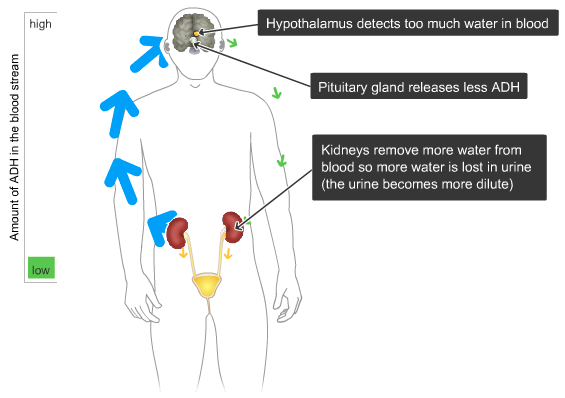 Some health officials question the prudence of drinking lots of water. The often prescribed two liters of water a day may be far too much. Moreover, our obsession with drinking water can in some cases lead to life-threatening health issues.

Dietitians, health officials, exercise gurus and others recommend that we drink plenty of water. They support the notion that consumption will improve concentration, enhance complexion, increase energy , alleviate headaches and even diminish our appetites. It has gotten to the point, that people are carrying bottles with them at all times, and if they go even a short time without their habitual gulp, they panic. The fixation prompts some health experts to refer to them as aquaholics, reports the Daily Mail.

Professor Mark Whiteley, a vascular surgeon and founder of The Whiteley Clinic in London, explains that drinking too much water for an extended period of time “resets brain chemistry to expect the excessive amounts of water.” The extra water consumption is linked to profuse perspiration and in some cases motivates individuals to endure surgery to remove their sweat glands.

On top of that, Whiteley informs that the extra water will disrupt your sleep:

“When we fall asleep, our brains release ADH, anti-diuretic hormone, to slow down kidney function and stop us feeling the need to urinate during the night,’ says Professor Whitely. ‘If you drink two or three glasses of water in the evening, all that extra fluid working its way through your system is likely to override the effect of ADH, fill your bladder, and have you getting up in the small hours. It can then be difficult to fall back to sleep.”

In 2008 Jacqueline Henson, while on a rigorous diet, died of water intoxication after consuming four liters of water in a couple of hours. Dr Frankie Phillips, of the British Dietetic Association explained that, ‘Drinking too much water too quickly — and we’re talking liters of water here, rather than cupfuls — can play havoc with the delicate balance of salts in the body.’

Contrary to what people have been told, over the last few decades, some experts now conclude that the best way to tell whether you need to hydrate yourself is if you are thirsty. How would we have ever known?