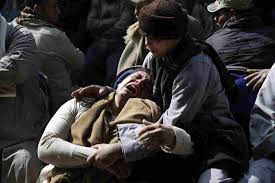 A man mourns for the Egyptian Coptic Christians captured in Libya and believed killed by militants affiliated with the Islamic State group, outside of the Virgin Mary church in the village of el-Aour, south of Cairo, Egypt, on Monday. Hassan Ammar/AP
Share:

The strikes came after Egypt’s President Abdel Fattah el-Sissi went on national television in the world’s most populous Arab nation and vowed revenge was coming. The address was followed by the airing of military video showing the planes taking off for the mission and an Armed Forces General Command statement saying the strikes were “to avenge the bloodshed and to seek retribution from the killers.”

“Let those far and near know that Egyptians have a shield that protects them,” it said.

The ISIS video released online showed the Egyptian victims, poor men from Egypt’s rural areas who had traveled to Libya looking for work, kneeling before Islamic State executioners. In Egypt, which by some estimates is about 10 percent Christian, the video sent shockwaves through both Muslim and Christian communities. El-Sisi, the U.S.-trained, former military leader who in a landmark New Year’s day address called on the Arab world to reject radical terror, and then took the unprecedented step of attending services at a Christian church, told his nation the deaths would be avenged.

“These cowardly actions will not undermine our determination” said el-Sissi, who also banned all travel to Libya by Egyptian citizens. “Egypt and the whole world are in a fierce battle with extremist groups carrying extremist ideology and sharing the same goals.”

On Monday, el-Sissi visited the main Coptic Cathedral of St. Mark in Cairo to offer his condolences on the Egyptians killed in Libya, according to state TV.

“These cowardly actions will not undermine our determination” said el-Sissi, who also banned all travel to Libya by Egyptian citizens. “Egypt and the whole world are in a fierce battle with extremist groups carrying extremist ideology and sharing the same goals.”

Libya’s air force commander, Saqr al-Joroushi, told Egyptian state TV that the airstrikes were coordinated with the Libyan side and that they killed about 50 militants. Libya’s air force also announced it had launched strikes in the eastern city of Darna, which was taken over by an ISIS affiliate last year. The announcement, on the Facebook page of the Air Force Chief of Staff, did not provide further details. Two Libyan security officials told the Associated Press civilians, including three children and two women, were killed in the strikes. The officials spoke on condition of anonymity because they were not authorized to speak to the media.

The video was released late Sunday by militants in Libya affiliated with the Islamic State group. The militants had been holding 21 Egyptian Coptic Christian laborers rounded up from the city of Sirte in December and January. The killings raise the possibility that the extremist group — which controls about a third of Syria and Iraq in a self-declared caliphate — has established a direct affiliate less than 500 miles from the southern tip of Italy, Libya’s former colonial master. One of the militants in the video makes direct reference to that possibility, saying the group now plans to “conquer Rome.”

In Washington, the White House released a statement calling the beheadings “despicable” and “cowardly”, but made no mention of the victims’ religion, referring to them only as “Egyptian citizens” or “innocents.” White House press secretary Josh Earnest added in the statement that the terror group’s “barbarity knows no bounds.”

Also Sunday, Secretary of State John Kerry called Egyptian Foreign Minister Sameh Shoukry. He offered his condolences on behalf of the American people and strongly condemned the killings. Kerry and the foreign minister agreed to keep in close touch as Egyptians deliberated on a response, according to a release from the State Department.

The U.N. Security Council meanwhile strongly condemned what it called “the heinous and cowardly apparent murder in Libya of 21 Egyptian Coptic Christians by an affiliate of the Islamic State of Iraq and the Levant,” using another name for the terror group.

“The United Arab Emirates is devoting all its resources to support the efforts of Egypt to eradicate terrorism and the violence directed against its citizens,” he said.

Sheikh Abdullah added that the killing highlights the need to help the Libyan government “extend its sovereign authority over all of Libya’s territory.”

The oil-rich Emirates, along with Saudi Arabia and Kuwait, has given billions of dollars in aid to Egypt since el-Sissi, who was then military chief, overthrew Islamist President Mohammed Morsi in July 2013 amid massive protests against his yearlong rule.

Egypt has since waged a sweeping crackdown against Morsi’s Muslim Brotherhood group, which it has officially branded a terrorist organization. El-Sissi has insisted the crackdown in Egypt, as well as support for the government in Libya, is part of a larger war on terror.

Libya in recent months has seen the worst unrest since the 2011 uprising that toppled and killed longtime dictator Moammar Gadhafi, which will complicate any efforts to combat the country’s many Islamic extremist groups.

The internationally recognized government has been confined to the country’s far east since Islamist-allied militias seized the capital Tripoli last year, and Islamist politicians have reconstituted a previous government and parliament.

Egypt has strongly backed the internationally recognized government, and U.S. officials have said both Egypt and the United Arab Emirates have taken part in a series of mysterious airstrikes targeting Islamist-allied forces.