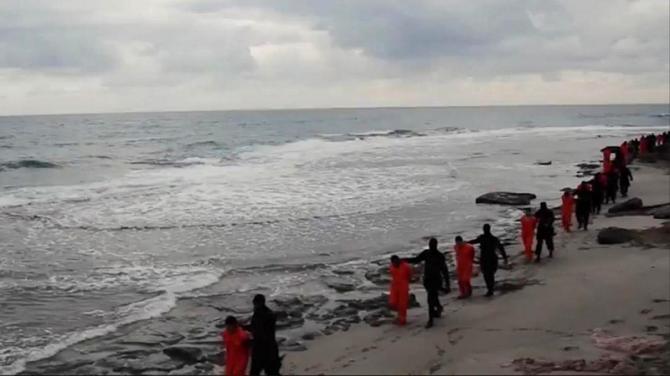 This image made from a video released militants in Libya claiming loyalty to the Islamic State group purportedly shows Egyptian Coptic Christians in orange jumpsuits being led along a beach, each accompanied by a masked militant. (Via AP)
Share:
Masked supporters of the Sunni jihadi group beheaded all 21 men simultaneously, filming the production in much the way the group filmed its torture to death of Syrian pilot Muath Kassasbeh in January.

Followers of the Islamic State and its self-declared caliph Abu Bakr Baghdadi simultaneously murdered 21 Egyptian Christians in a videotape released today, removing whatever doubt remained that the Sunni jihadi group has established a strong presence in Libya.

The text and video were targeted at terrorizing a Western audience as much as Arab speakers, with captions in both Arabic and English and a masked speaker who issued his threats in fluent English. The style of the video is very much like the last IS snuff movie, involving the burning to death of Jordanian pilot Muath al-Kassasbeh in a cage in Syria.

Like the murder of Lt. Kassasbeh, this was a high definition video exhibiting significant post-production editing, including jump cuts and other editing techniques stolen from Hollywood slasher flicks. This mass murder was if anything, more horrific. Unlike Kassasbeh, a Jordanian pilot whose F-16 crashed in Syria, the victims this time weren’t fighting the group. They were simply Egyptian Coptic Christians trying to make a living in Libya, kidnapped in early January and eventually murdered due to their faith alone.

Most of the victims appear to have been kidnapped in early January in the town of Sirte, the hometown of Muammar Qaddafi, who was deposed and murdered in 2011, ending the first phase of Libya’s civil war. In the years since, the country has been riven by competition among warlords and the rise of militant jihadi groups, a number of whom have been supportive of the Islamic State’s calls to eradicate all faiths and governments on the globe except their version of Islam.

When precisely these murders took place is unclear; IS related social media accounts distributed still photos from the murders on Friday.

The murders took place on a beach, in what IS called “Wilyat Trabulus,” or the “Province of Tripoli” in their version of the globe. Baghdadi’s followers have taken to declaring national and local borders null and void and renaming places they imagine they rule. The name roughly corresponds to the coastal eastern half of the country.

But what is clear is that IS supporters have the numbers, the wherewithal, and the operational security to hold 21 captives for weeks and then carry out a highly-produced murder show in a beach without fear of intervention from Egypt or anyone else. The thin stretch along the Mediterranean coast is home to roughly 90 percent of Libya’s people.

Twenty of the killers are in identical black outfits – including what looks to be brand new body armor, also held by black vests. Their Coptic victims are in orange jumpsuits. The lead murderer is in US military-style digitized dessert camouflage. And aside from the short blades they use to murder their captives, they don’t appear to be armed – strongly implying a number of other people pulling security off screen.

The voice of the leader of the murders will be of great interest to Western intelligence agencies. Whether the voice was dubbed in during post-production is hard to say, since like his fellow killers he didn’t dare reveal his face. But the English is barely-accented, and sounds more like it was learned in Canada or the US than in the UK.

“All praises due to Allah, the strong and mighty. And may blessings and peace be upon the ones sent by the sword as a mercy to all the worlds,” says the lead killer, emphasizing their plan to kill all the Christians they can. He speaks of how IS has been seen “chopping off the heads of those that have been carrying the cross delusion for a long time” in Syria and then prophecies that war will continue with his group until Jesus comes down from the heavens “breaking the cross and killing the swine.”

After his little show, the murders. Suffice it say they were gruesome, prolonged, and painful.

There is a good chance that the latest IS savagery will inflame Egyptian public opinion against the group, much as Kassasbeh’s murder did in Jordan. But Egypt has a limited ability to project force – its military is mostly trained for domestic control and running the expansive business empires of its senior officers. What Egypt will actually be able to do about the group in Libya – rather than its hundreds of followers in the Egyptian Sinai peninsula – remains to be seen.

However, the days of ignoring IS in Libya will be over. Unlike in Iraq, where there’s a central government to work with, or in Syria, where there’s both a strong national army and outside support for Bashar al-Assad’s side of the fight against Syria, Libya barely has any functioning institutions anymore. The country could prove richer pickings for the group long term – than its two current struggles to the east.